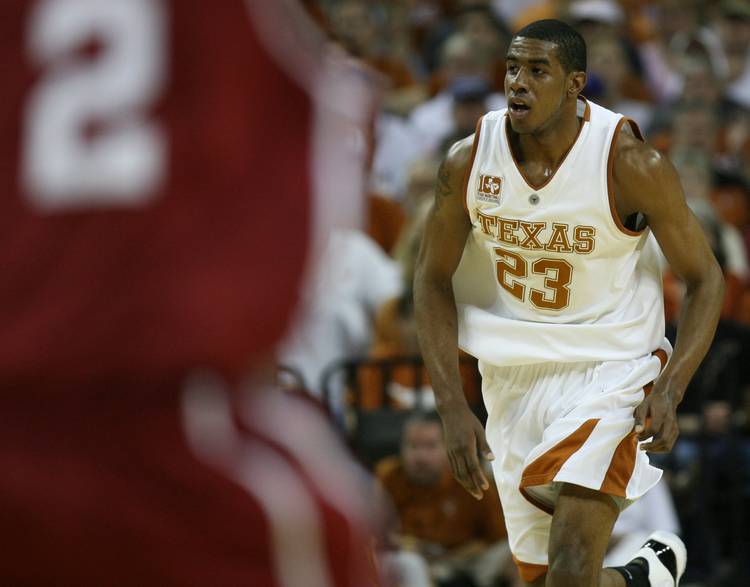 UT's LaMarcus Aldridge runs up court during a game against Oklahoma at the Frank Erwin Center on Sunday March 5, 2006. Jay Janner/AMERICAN-STATESMAN

Texas senior center Prince Ibeh won the Big 12 Conference Defensive Player of the Year honors on Sunday as the league shifts from regular season to postseason. Ibeh went from career sixth man to starter following the Cam Ridley injury in December and responded by blocking 44 shots in conference play and finishing with 60 on the season.

It’s a nice feather in the Garland native’s cap that he was named the league’s best defender in a season where many coaches have claimed the Big 12 has never been better.

Here are the other times when a Longhorn men’s basketball player was honored by the Big 12 following the regular season.

Big 12 Player of the Year

Tucker averaged 16.1 points for Texas as a junior and led the Big 12 in rebounds, was second in points, and his 66 steals was fifth in the league. He was a second-team All-American and helped Texas to a 30-7 record and an Elite Eight appearance. His teammate, LaMarcus Aldridge, won defensive player of the year.

Durant arguably had the greatest single season in the history of college basketball, let alone the Big 12. He averaged 25 points, 11 rebounds, nearly two blocks and two steals while shooting 81 percent from the the line and 47 percent from the field.

The dude was amazing, and everyone could see his future NBA success (except, of course, for the Portland Trailblazers, who didn’t draft him).

Defensive Player of the Year

Like Durant, Aldridge was a future No. 2 overall pick (the Trailblazers surprisingly didn’t pass him up in the draft) and, like Durant, he had one of the best Longhorn seasons ever. While Tucker scored more points and grabbed more rebounds en route to his POY win, Aldridge’s sophomore season saw him lead the Big 12 in blocks with 73, was second in rebounds with 9.2 a game and was first in defensive win shares. He was 10th in steals in the Big 12 with 50.

In a year where Kansas went 35-3 and 14-2 in the Big 12, Texas actually had more individual players recognized than KU (the Jayhawks did have league player of the year Marcus Morris and coach of the year Bill Self).

Balbay was a senior and helped Texas to a 28-8 record and 13-3 Big 12 season. The Istanbul, Turkey, native was a lock-down defender whose stats never quite showed how valuable he was to the Longhorns.  He averaged 1.5 steals a game in conference play.

Big 12 Freshman of the Year

The year before he led the Longhorns to the Final Four, Ford was a freshman sensation and sparked the team to an Elite Eight finish and 22-12 record. He led the nation in assists with 8.3 per game and led the Big 12 in steals with 2.2 per game. Ford won the Wooden Award in 2003 but lost Big 12 Player of the Year honors to Kansas’ Nick Collison.

A young player on a team filled with young players, Gibson was the standout among a future POY (then sophomore Tucker) and future DPOY (then freshman Aldridge). Gibson led the Longhorns in points per game (14.2), steals (1.8), assists (3.9) and played 32 minutes per game. He was third in 3-point field goals, eighth in assists and sixth in steals in league play. Kansas senior Wayne Simien was the Big 12 Player of the Year.

Thompson was the second individual award winner from Texas this season, and the Canadian freshman went on to be a lottery pick shortly after this award.  He averaged 13 points per game, 2.4 blocks and shot 54 percent from the field. His scoring average rose to 14.6 points in conference play. He led the Big 12 in blocks and offensive rebounds.

The Dallas area native was a prized recruit and eventual lottery pick by the Indiana Pacers, but at Texas, Turner was sometimes buried in a rotation of big man. Still, he was good enough to win the award for freshman of the year over Iowa State’s Jameel McKay (who was the league’s DPOY) and Kansas’ Kelly Oubre, another NBA first-round pick. Turner averaged 10 points and 2.6 blocks while grabbing 6.5 rebounds per game. In Big 12 play, he averaged 2.9 blocks.