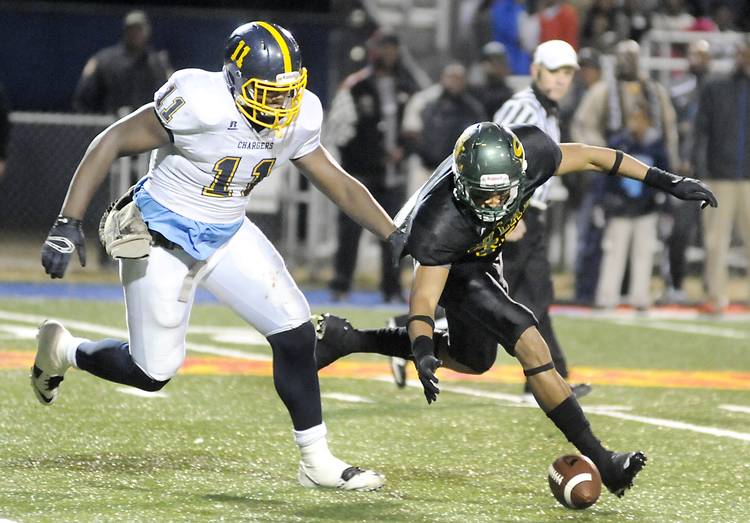 HOW HE GOT HERE: Roach, who was recruited by defensive line coach Brick Haley, ended up picking Texas and not his hometown LSU, which chose not to pursue him. He committed to the Longhorns last November, the day before Texas’ win over Kansas. He made visits to Alabama and South Carolina, but stuck with Texas.

AT MADISON PREP: Logged time on offense (tight end) and defense (outside ‘backer, defensive end), but it’s on defense that he made his biggest impact. He racked up impressive numbers for a start-up varsity program that didn’t start up until 2013. Was a four-time all-state selection and was named the Baton Rouge Advocate’s all-metro defensive player of the year.

THE NUMBERS GAME: Roach scored 3 defensive touchdowns his junior year. He’s not from Texas, so he didn’t make our Fab 55, but he was listed as Louisiana’s No. 35 prospect in the New Orleans Times-Picayune’s Nifty 50. Roach was timed at a 4.73 in the 40. He wore No. 11 at Madison Prep. And remember how Charlie Strong heavily recruited Florida in his first class (See the Florida Five)? Louisiana was the new Florida in 2016 — Texas signed 4 from Louisiana, including Roach.

THEY SAID IT: “I found a good fit with Texas and love it. The best is yet to come from Malcolm Roach.” — Roach

1. Football runs deep in Roach’s family. His father, Mike, is the head coach at Madison Prep and also coached at Alcorn State, Grambling and Morehouse. His uncle, Tyrone Roach, played for the Buffalo Bills. His brother was a starting cornerback at Grambling through this past season. His late grandfather, Albert Ventress, was a legendary coach at McKinley High in Baton Rouge, where he won two state titles. Even Roach’s mother, Nancy, had a playing career — she was a quarterback at Baton Rouge High.

2. At Texas, Roach will play the Fox linebacker, the same position as fellow signee Erick Fowler of Manor. Roach said he actually encouraged Fowler, a four-star prospect, to pick Texas, believing it would benefit the program to have both of them. “I love competition,” Roach said. “I know Erick and I are gonna battle it out for the position, but in the Big 12 everyone’s gonna have to play because they run so many plays. I feel like me and Erick will be a great combo.”

3. Roach can move for someone who weighs 250-plus pounds. A shot putter at Madison Prep, he had some fun and jumped into a 200-meter dash last year and finished third in 24.8 seconds. He runs the 40-yard dash in anywhere from 4.7 to 4.8 seconds.

Texas battles back to win at Rainbow Wahine Classic