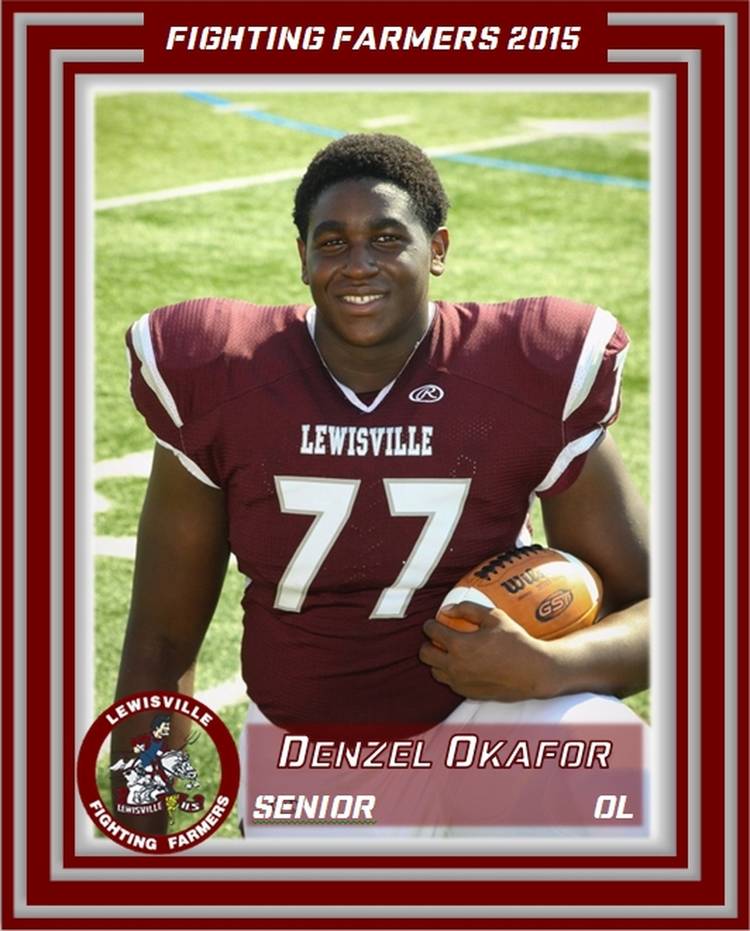 HOW HE GOT HERE: Former receivers coach/playcaller Jay Norvell was key, and he got help from both offensive line coaches Joe Wickline and Matt Mattox. The rest of the Big 12 recruited him early, but since last summer Okafor was trending Texas. He committed to the Longhorns in mid-November, the week after he was in town for the win over Kansas.

THE NUMBERS GAME: Wearing his No. 77 jersey at Texas seems unlikely. Right guard Patrick Vahe, who played his own high school football only 18 miles away (Euless Trinity) from Okafor, wears 77. It wasn’t a great run in high school during Okafor’s time at Lewisville, which used to be a state power; the Farmers have gone 11-18 the last three years. Okafor was one of 3 guards signed this year — Belton’s Zach Shakelford is already enrolled and going through spring workouts, and Arlington Bowie’s Tope Imade arrives this summer. Okafor, however, is the highest-rated guard among the three.

1. If anyone understand the value of an education, it’s Okafor. His father, Peter, teaches social studies for the Dallas school system. His mother, Jacinta, is a registered nurse. Denzel is the youngest of five siblings.

2. When UT assistants Matt Mattox and Jay Norvell made an in-home visit, Okafor said his mother made a terrific Nigerian rice and stew. Everyone loved it, although the coaches may have noticed that Okafor wasn’t hungry. “I ate too much that day,” he said. “I had Raising Cane’s before. They didn’t know that, so I just took a little bowl.”

3. Lewisville coach Gregg Miller requires his players to shave every year before the team photo. He wasn’t sure how many times Okafor had ever shaved in his life. So he called and asked. “Hey, how many times have you ever shaved?” Miller asked his guard. Okafor’s response: “All the times you’ve told me, coach.” That’s at least four. Maybe single digits overall.

Connor Mayes moved to closer for start of Big 12 play