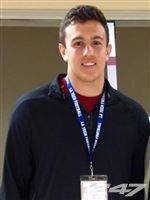 HOW HE GOT HERE: Texas wanted him to be part of a package deal — the Longhorns also wanted to sign fellow Brother Martin tight end Irvin Smith, who decommitted from Texas A&M and signed with Alabama. Tight ends coach Jeff Traylor was Aucoin’s primary recruiter, and the Longhorns offered him a scholarship last spring. He was a Texas lean throughout last fall after committing over the summer.

AT BROTHER MARTIN: Caught only two career passes in high school — one as a junior, another as a senior — yet still received the team’s highest honor, the Bob Colin Award, named for the legendary Crusaders coach who led the program for 27 years. Aucoin was much more of a blocker than a catcher.

AUCOIN’S BEST GAME — SO FAR: You’d think it could be the 2014 game where he caught his first career pass, a 48-yard gain that his head coach said changed the face of the game. Or maybe last fall’s Catholic League showdown with New Orleans Rummel, where he hauled in a 7-yard pass for his first (and only) touchdown. But consider this: In the 2014 season opener against Patterson, Aucoin — he was a blocker, not a catcher, remember — was credited with 20 pancake blocks. That’s right. Twenty.

THE NUMBERS GAME: The easiest number? 2 — the number of career catches Aucoin had in high school. But there’s more to him than that; he was credited with 58 pancake blocks his senior year, a pancake counting as a block where you knock the other guy on his back. His Brother Martin teams went a combined 18-6 in his two years, including a 10-3 season in 2014 that saw the Crusaders reach the state semifinals. Despite the low offensive numbers, he still was considered the No. 17 tight end prospect in the country by ESPN (No. 55 by Scout, No. 58 by 247Sports) and was Louisiana’s No. 48 overall prospect on the New Orleans Times-Picayune’s Nifty 50 list.

THEY SAID IT: “I can play. I know what I can do. I don’t care what other people think I can do. I didn’t have a lot of opportunities, but that gives me something to prove when I get to Texas.” — Aucoin

1. Aucoin’s school, Brother Martin, is the archrival of St. Augustine, the home of UT defensive tackle signee D’Andre Christmas-Giles. The schools are separated by a couple of miles in New Orleans’ Gentilly section, but in some ways they’re worlds apart. Brother Martin is an all-boys school, and predominantly white. St. Augustine is all-boys too, but exclusively black. St. Augustine took last year’s meeting in football, 47-44.

2. Last month, Brother Martin head coach Mark Bonis accepted a job at Memphis, as the program’s coordinator of player personnel. But then he had a change of heart and returned to Brother Martin one week later.

3. After sitting out his junior season to focus on football, Aucoin returned to the basketball team this year and started some games at center. The Crusaders, who went 17-13, have fallen from the days when they were led by former Texas guard D.J. Augustin.

Longhorns in the NBA: Through March 23

Texas-UConn games will include 2017 contest at Erwin Center