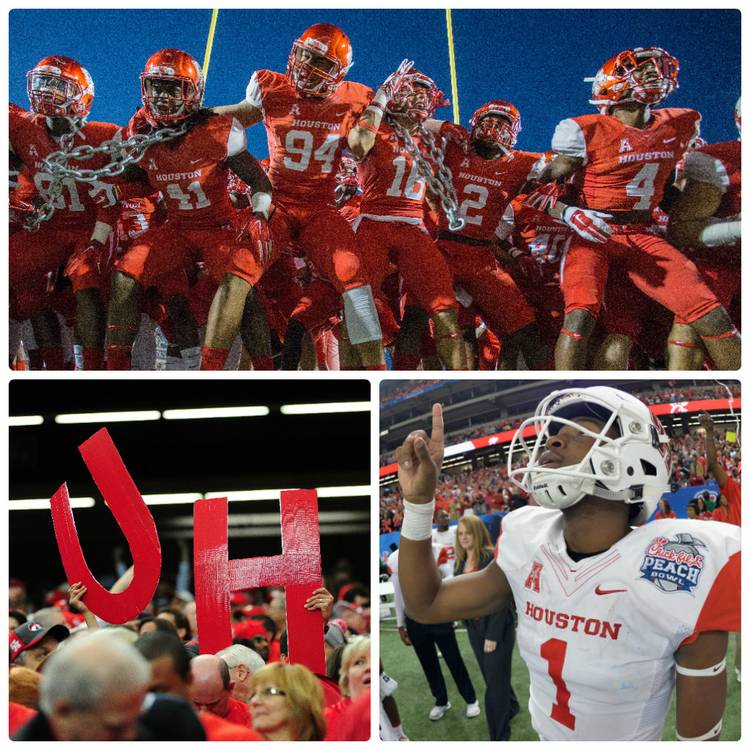 That may or may not happen, but if it does, what are the Big 12’s expansion options? We’re taking a look at two possible target schools a day this week. Here’s the seventh:

Pros: Houston is as competitive on the football field now as during the Andre Ware days. The Cougars rank second in the state of Texas in wins over the past 10 years with 88, trailing only TCU’s 100. Tom Herman may not be Knute Rockne quite yet, but he created a stir with a 13-1 record punctuated with a league title and an impressive 38-24 win over Florida State in the Chick-fil-A Peach Bowl. Houston was one of only two schools in the country to play at least four ranked teams and beat all of them. Houston, the birthplace of Phi Slama Jama, had a strong basketball turnaround last season under former Oklahoma coach Kelvin Sampson; the Cougars made the NIT. The schools five Final Fours would rank third in the Big 12 behind Kansas (14) and Oklahoma State (6). UH has won seven conference championships through the first three years of the AAC compared to Cincinnati (3) and Memphis (1) of which both count a three-way tie in football for one. The UH men’s track and field program is ranked No. 9 in the country; its baseball team won the AAC title and an NCAA regional championship in 2014. The city of Houston is the country’s fourth-largest. The close proximity to so many Big 12 schools would lower travel expenses for all Big 12 sports programs, with two international airports servicing 190 destinations and approximately 78,000 hotel rooms with an average price per room of $110.

Cons: How can we ever forget all the Cougar High references? The biggest impediment for UH might be that some Big 12 schools look down upon the school condescendingly and just don’t consider it big-time enough. And some might make the argument that the Big 12 doesn’t want to feature five schools from one state in the same conference, though Texas is no ordinary state — it’s 827 miles from Beaumont to El Paso on I-10, which is just shorter than the distance from College Station to Athens, Ga. (895). Television numbers suggest the city may be morphing into an SEC market; of the top 10 games in Houston last season, market rating-wise, six were SEC games, two were UH games and only two were Big 12 games — Texas-Oklahoma and Baylor-TCU, predictably. Adding UH could negatively impact recruiting in the fertile Houston area for current Big 12 schools. And fan support isn’t huge; UH ranked sixth nationally with an increase of 5,669 fans in average attendance in 2015, but fans were slow to sell out games for a team that was flirting with the College Football Playoff. The average attendance over the last five years has been only 29,105.

Academic ranking: No. 187, according to U.S. News and World Report.

Football stadium: TDECU Stadium  (40,000 capacity, but with the ability to expand to 60,000 in the future). The new $125 million facility opened in 2014. UH also is designing an indoor practice field facility with indoor turf and a football-only strength & conditioning center.

Basketball arena: Hofheinz Pavilion (capacity 8,479). The UH Board of Regents approved a $60 million renovation to the building that will follow in the footsteps of recently completed Guy V. Lewis Basketball Development Facility for men’s and women’s basketball.

Kevin Lyttle’s odds: 14-to-1. UH would be a convenient fit, but don’t be surprised if the Big 12 is more interested in staking out new turf rather than getting the old SWC band back together again.

PREVIOUS STOP ON OUR TOUR: Connecticut