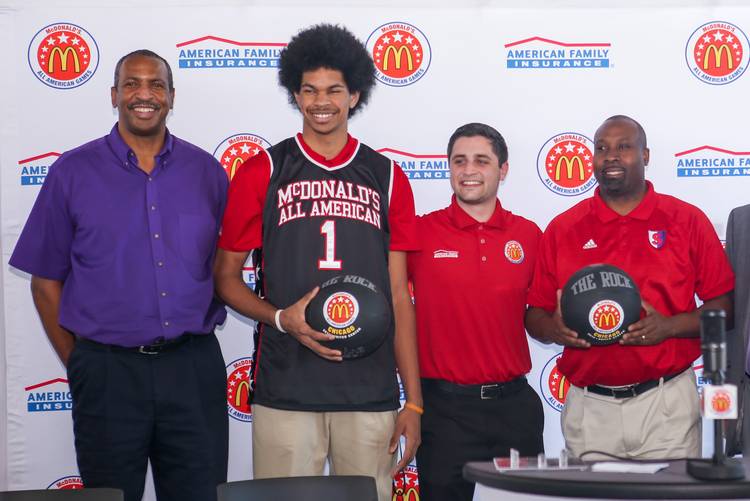 Texas’ patience has paid off. Jarrett Allen has finally committed to the Longhorns.

The five-star McDonald’s All-American, who kept a low profile throughout the recruiting process, has submitted scholarship paperwork to join Texas, according to a source familiar with the situation. Scout also reported the news of Allen’s decision.

Allen, considered the nation’s 15th-best prospect by ESPN, becomes the second five-star recruit pulled in by Texas coach Shaka Smart during this recruiting cycle and one of the biggest names to land in Austin in recent years. Irving MacArthur guard Andrew Jones was also a McDonald’s All-American, same as Allen.

Only few expected it would take this long. Allen did not sign his national letter of intent in mid-April, like many top-flight recruits do. In fact, Allen didn’t sign his paperwork by the May 18 deadline. That wasn’t a deal breaker, though, as players could then sign what’s known as an athletic scholarship agreement.

The St. Stephen’s High School product averaged 19 points and 13 rebounds in leading his team to a 25-5 record and a second-consecutive Southwest Preparatory Conference championship as a senior.

After starting his career at Round Rock High School, he went on to become the 2015 All-Central Texas Player of the Year and a first team All-Central Texas selection in 2016 at St. Stephen’s. Allen also was a member of Team USA at the Nike Hoops Summit last month.

By waiting things out, Allen became one of the last top 20 players uncommitted. Being pursued by Kansas and Houston, Allen had to debunk rumors of who he had eliminated from his list and even made light of his difficult decision last month.

In the end, Texas landed the 6-foot-10, 210-pound power forward, which is what the recruiting site 247Sports had predicted for much of the year. Allen is the No. 17-ranked player in the class according to 247Sports and one of three top-10, in-state products heading to Austin next year.

Breaking down the recruiting class

It is the first time Texas has landed two McDonald’s All-Americans in one class since 2010 when Tristan Thompson and Cory Joseph both signed with Texas.

For the second time in three years Texas has beaten the defending Big 12 champions in a recruiting battle. In 2014, Myles Turner, then the top uncommitted player in the nation and No. 6-rated prospect chose UT over Kansas.

Although he went 0-2 against the Jayhawks in his first year, Smart beating Kansas for a prospect is a good sign moving forward as he has lofty goals for the 2017 class.

Kansas won’t be crippled with the loss of Allen. The Jayhawks will welcome the No. 1-rated player, and the highest-graded player in the history of 247 Sports, to campus next year in Josh Jackson.

What to expect when expecting Jarrett Allen

Here are some Allen highlights:

According to one scouting breakdown, Allen is an elite shot blocker with a wing span measuring 7 feet, 5 inches long. But he can sometimes be overpowered in the paint, something a strength training program can improve.

Allen could step into the starting lineup for Texas. While the Longhorns have a hoard of guards, Allen joins a thin front court that, as of now, includes Shaq Cleare and Banks.

Is Allen nothing more than a “one-and-done” player at Texas? No one can predict this for sure, but how he develops physically may be more important than what he does on the court this season in terms of his NBA potential.

Longhorns in the NBA playoffs: Through June 2