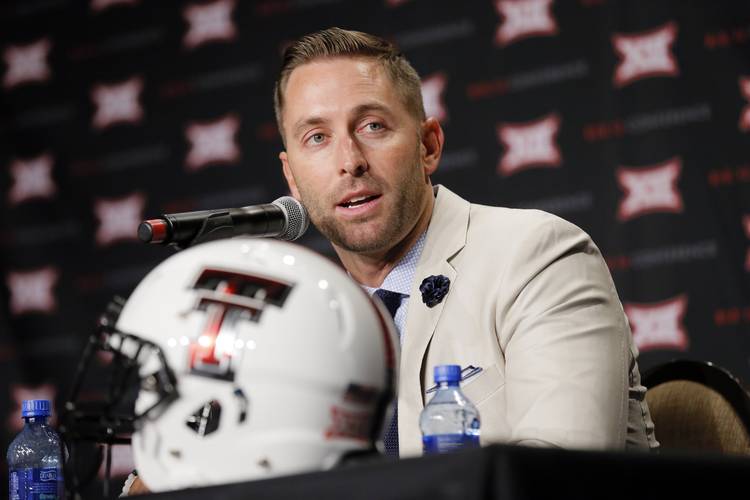 DALLAS — Now going into his fourth season at Texas Tech, coach Kliff Kingsbury has an undisputed signal-caller. The Baker Mayfield saga is long over, and the Red Raiders now belong to Patrick Mahomes II.

Mahomes threw for 4,653 yards last season and 36 touchdowns. Kingsbury needs Mahomes to take another step forward as a leader to help Tech break through the difficult Big 12 logjam atop the league.

“He worked on becoming a better all-around quarterback and last year made spectacular players, really carried us at times, moving around and making things happen,” Kingsbury said. “This year we’re going to work on things with him. When the ordinary play is there let’s take it.”

Kingsbury and Mahomes were both featured on the cover of Dave Campbell’s Texas Football magazine this summer. And Mahomes will be one of the key players drawing media attention Monday afternoon at Big 12 media days.

But, of course, Mayfield still lingers around the Red Raiders. The former Lake Travis product transferred to Oklahoma and led the Sooners to the College Football Playoff semifinals last season.

Kingsbury said he voted in favor of allowing Mayfield to gain back his lost year of eligibility after transferring to OU. In May, Big 12 officials tweaked the rules that allowed for walk-ons to go elsewhere and receive a scholarship.

“I know a lot (of talk) has come from Baker’s side, but loved coaching him, loved the chip on his shoulder, cheered for him in every game except one, and it’s been fun to see the success he has had,” Kingsbury said.