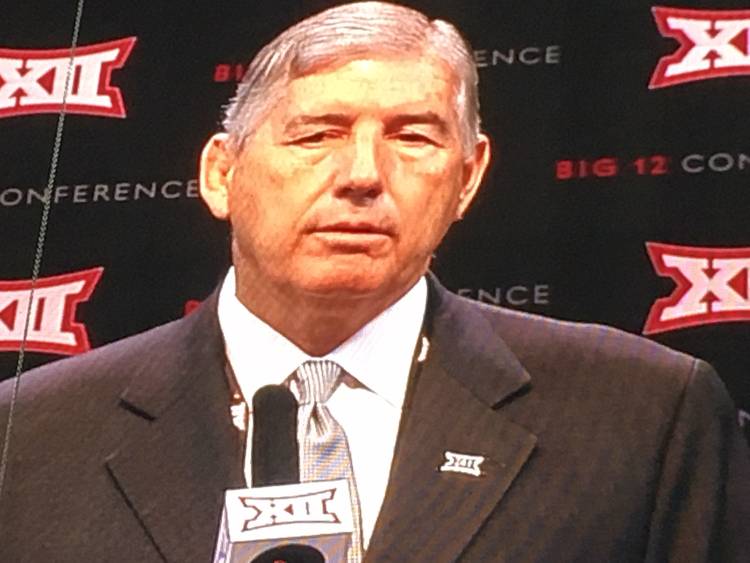 FRISCO — Big 12 commissioner Bob Bowlsby is bullish on the Big 12.

He kicked off Big 12 media days early Monday at the Ford Center, the home of the Dallas Cowboys, by congratulating the league on what it accomplished in 2017-18.

He lauded Texas for having each one of its teams make postseason play and congratulated the men’s swimming and diving team for winning its fourth consecutive NCAA championship.

Bowlsby complimented Oklahoma for making the CFP semifinals as well as the Sooners producing so many first-round draft picks. Heisman winner Baker Mayfield was the top choice in the NFL draft. Basketball star Trae Young was a first-round NBA pick. And Kyler Murray, who likely will be OU’s starting quarterback, was selected in the first round of the Major League Baseball draft.

He also offered his thoughts on other topics:

On legalized sports gambling: “I think we’re very much in a wait-and-see environment right now. There’s a lot of talk about integrity fees. There is a lot of talk about how it gets managed. Are we really going to end up with 50 states that all have different laws on legalized gambling? There are some states that have moved ahead but most are moving slowly, and, you know, the change in PASBA makes the gambling in college sports legal subject to state jurisdiction and I think we’re going to have to keep watching. What do we end up with if a couple of our states in the Big 12 footprint have legalized gambling and three others don’t? What do you end up with if some say you can bet on professional sports but you can’t bet on high school and college sports? It’s just taking a while to settle in and frankly I don’t know how it’s going to turn out. I think that we spend time in football and basketball particularly.

“We have a consulting group that helps us look at when lines move abrupt and when there seems to be an unusual amount of money bet on a particular game. We do it mostly because we want to make sure that we protect ourselves from point shaving and from officiating issues and things like that; but, you know, the mainstream gambling environment, you go to an English Premiere League game, there’s a betting kiosk right next to the hot dog stand.

“It’s hard to imagine that we’re going to get there with college and universities, but there is some enabling legislation out there that would permit a very far afield outcome from what we have experienced in the past. As near as I can tell, the real losers in the whole thing are organized crime. If it’s legal everywhere, it’s hard to imagine why people would place illegal bets and risk that sort of jeopardy. We’re all keeping our ear to the ground and that’s the best I can answer the question.”

On injury reports: Bowsbly said the league hasn’t made a decision as to whether it will release injury information. “My sense is that there’s going to be a human cry for that to happen and as long as we don’t get too far into the specifics of what the injury is and what kind of medication they may be taking and what the duration is and those kinds of things, but some sort of simple system may work. We’ve talked about whether or not it gets managed by the conferences or whether it gets managed at a national level, and I think that’s unresolved at this point.”

On the Baylor sexual assault scandal: Bowlsby said the Big 12 still is in the process of verifying the 105 recommendations made by Pepper Hamilton, an outside law firm Baylor hired to investigate its school and athletic program on how it handled sexual assault allegations.

Bowlsby emphasized that the Big 12 is verfying, not investigating.

Bowlsby said he has no idea when the NCAA will complete its investigation. “I don’t have any information on time frame,” Bowlsby said. “We’re kept informed, but it’s mostly after the fact, and that’s a separate process. We will know what happens, when it’s at the end.”

On the sale of alcohol at games: “The conference really doesn’t have a dog in the fight on it. I think institutions are left to their own discretion and as you know some having forward with it and some have not. It’s largely a matter of institutional culture. From a personal standpoint, I do think that probably it’s selling alcohol in the stadium is probably superior to having pass outs at halftime where everybody goes out and power drinks for the length of the halftime. I think that from a game management standpoint it’s better managed with a controlled environment inside but reasonable people can disagree on it. It’s not something that the conference has weighed in on, but, you know, there is an intersection, of course, because if you start to have game management issues or conduct issues, it isn’t too much of a leap to think that the conference could be involved in it at some point in time.”