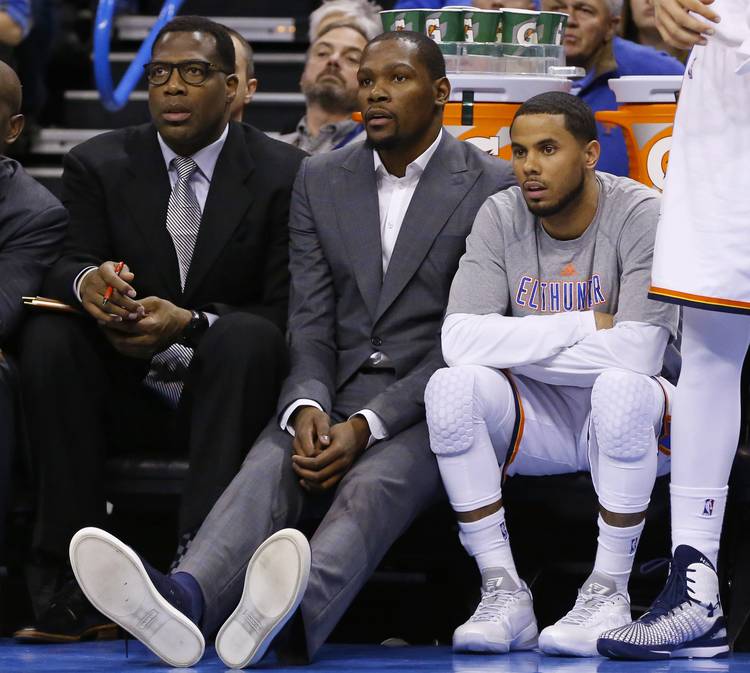 FILE - In this March 4, 2015, file photo, injured Oklahoma City Thunder forward Kevin Durant, center, watches from the bench with guard D.J. Augustin, right, and assistant coach Mark Bryant, left, during the first quarter of an NBA basketball game against the Philadelphia 76ers in Oklahoma City. Reigning NBA MVP Kevin Durant likely won't return this season.General manager Sam Presti said Friday, March 20, 2015, that Durant still has pain in his right foot, well after he was expected to be ready to return. When asked if the best thing would be best to shut him down for the season, Presti said: "Essentially, that's the direction that we're taking right now, in terms of removing him from all basketball-related activities." (AP Photo/Sue Ogrocki, File)

The University of Texas has produced 41 NBA players since 1957 — the first year the program started tracking its NBA-bound players. Fourteen of those players were first-round picks and seven of those players are currently on — or striving to be on— a NBA roster this year.

So who are the current former Longhorns in the NBA— or at least competing for a roster spot this month?

If you’re a basketball fan of all levels and live in the state of Texas, chances are you know who LaMarcus Aldridge is. The former five-star recruit from Seagoville High School near Dallas was the Class 4A Player of the Year in 2004 and a Parade All-American.

He played for the University of Texas for two seasons, averaging 12.4 points per game and 7.5 rebounds per game, and was named the 2006 Big 12 Defensive Player of the Year. He was also named a third-team All-American as a sophomore.

Texas went 30-7 that season, won a share of the Big 12 title (with who else, Kansas), reached the Elite Eight of the NCAA tournament and finished the season ranked No. 9 in the nation.

Aldridge was picked second in the NBA draft by the Portland Trailblazers and has gone on to be one of the best power forwards in the league.

A 4-time All-Star, Aldridge was the NBA 2015 free agent season’s biggest fish and decided to return to Texas after signing a four-year, $80 million deal with the San Antonio Spurs.

A 2006 McDonald’s All-American originally from New Orleans, Augustin arrived in Texas after being displaced by Hurricane Katrina. He finished his high school career at Hightower High School in Missouri City.

He arrived in Austin and joined another superstar freshman from Maryland (more to come on this guy). Augustin started all 35 games for the Longhorns in 2006-07 and averaged 14.4 points per game and 6.7 assists as a freshman.

Augustin skipped the NBA draft in 2007 and returned to the 40 acres for his sophomore season. He became the first Longhorn ever to win the Naismith Hall of Fame’s Bob Cousy Award as college basketball’s top point guard (to be fair, this award wasn’t handed out when T.J. Ford was on campus. The Cousy Award was first given out in 2003-2004, a year after Ford).

Augustin was also a first team All-American and averaged 19.2 points per game.

After declaring for the NBA, the Charlotte Bobcats took Augustin No.9 that year, making Texas the only school in the nation in to have three straight top-10 picks in that three-year span (2006, 2007 and 2008).

After a second team all-rookie campaign in 2008-09, Augustin’s career took a dip and now the 27-year-old guard is on his sixth team, the Oklahoma City Thunder.

And he might have found a home in the OKC!

Bradley was a McDonald’s All-American in 2009 and spent just one year in Austin before declaring for the NBA.

After arriving from Findley College Prep, the Tacoma, Wash. native averaged 11.6 points per game for the Longhorns. He was named to the Big 12 All-Rookie team in 2010 after helping Texas to a 24-10 record and sixth-place finish in the Big 12. Texas reached the NCAA tournament, but lost in the first round.

Bradley was selected 19th overall by the Boston Celtics and has carved out a strong career as a defensive stalwart for Boston, earning second team NBA All-Defensive Team in 2013.

For one year, the eyes of college basketball were very much on Austin as Kevin Durant, a Baltimore product, had one of the finest freshman campaigns in the history of the sport.

It was a preview of what was about to happen in the basketball world.

Despite the historic season, and the pairing with another McDonald’s All-American (Augustin), the Longhorns went 25-10, finished third in the Big 12 and lost in the second round of the NCAA tournament.

Durant went on to be the second pick in the NBA Draft (the highest ever for a Longhorn) and became the first UT product to win the NBA’s Most Valuable Player award in 2014. Durant was the 2008 Rookie of the year, a gold-medal winning Olympian and a four-time NBA scoring champion.

His No. 35 was retired by the Longhorns basketball program.