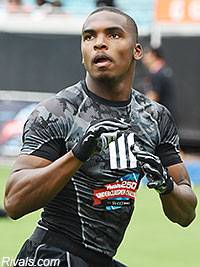 All-American receiver Devin Duvernay thought he’d signed with Baylor back in February. But his family learned this week that a filing error has nullified his national letter of intent.

According to ESPN.com, Duvernay isn’t bound to the Bears anymore, so he is free to pick another school. Duvernay was the third-best receiver prospect in the country, as ranked by ESPN.

It seems that Baylor failed to turn in Duvernay’s letter to the Big 12 earlier this spring.  The letter was supposed to have been filed within 15 days.

The national letter of his twin brother, Donovan, was filed. The twins were trying to get out of their letters this week in the wake of a sexual assault scandal that cost Bears coach Art Briles his job. The father discovered the error when he couldn’t access Devin’s letter in the database.

ESPN is listing Texas and TCU as leaders for the receiver. He can take one more official visit.

At least seven incoming freshmen have asked to be released from their letters with Baylor. The freshmen are required to file paperwork with the NCAA asking for a release. Then Baylor has 30 days to answer whether it will grant the release.

Silsbee offensive lineman Pat Hudson, who also considered Texas and Texas A&M, is one of the seven. He was viewed as the top offensive guard in the country.

And next year’s recruiting class only has one commitment remaining. Six have decommitted since last Thursday, with quarterback Kellen Mond being the latest to do so.

Longhorns in the NBA playoffs: Through June 2