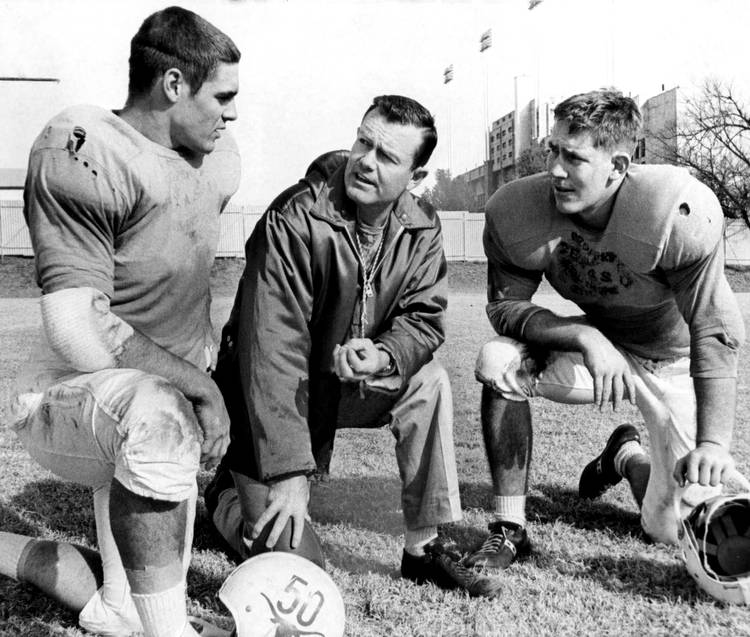 The Big 12 Media Days and the Republican National Convention are starting on the same day and both seem to officially launch the college football season and the general election (even though it felt like both were started years ago).

With that mashup in mind, it got us thinking about whom each Big 12 football program would choose as its presidential ticket. We’re also assuming that in this mythical list, all these people would still be alive and eligible to run for president, so don’t get caught up in the details.

Here are our thoughts in alphabetical order:

OK, we admit that this ticket looked different six months ago. But the top of the ticket didn’t change. Robert Griffin is a Heisman Trophy winning quarterback who put Baylor football on a national stage. Sure, post college life hasn’t been great and sure he’s probably not well liked in Washington (but America wants that, right?), but that’s why we’re pairing him with the greatest NFL player Baylor has ever produced in hall of famer Mike Singletary.

Jack Trice was a barrier breaker who was the first black athlete in Iowa State history in the 1920s! Decades before Jackie Robinson broke baseball’s color barrier. How is there not a Disney movie about Jack Trice? He died after suffering an injury playing for Iowa State only after the son of a former slave and Buffalo solider became a two-sport athlete at Iowa State. Trice only played in two football games, dying following his second contest. Iowa State named the football stadium after him in 1997, and anyone who has ever been to Jack Trice Stadium knows that it’s an underrated venue.  Wallace was a backup in the NFL for years and before that he was a standout for the Cyclones.

The Kansas ticket: Gayle Sayers and Bill Self

Sayers is a no-brainer. Can Gale Sayers be a “uniter and not a divider?” Can Sayers overcome challenging obstacles? Does Sayers have a story that will win America’s heart? (Sayers walks to TV, puts “Brian’s Song” on and drops mic). Sayers is the greatest football player in Kansas history and his nickname is the Kansas Comet. As for his running mate, we know basketball coach Bill Self has nothing to do with football, but try telling the Jayhawk fans who can’t stop talking about his program as they wait for the end of the football season every year. Plus, Self has won 12 straight conference titles. If he reaches 15, the school may actually ask him to coach the football program.

If we need to explain why Bill Snyder is at the top of the ticket, you haven’t been watching the Big 12 that long. Snyder went to a terrible football program in Kansas State, left a few decades later and the program collapsed. Snyder returned, and the program was no longer terrible again. Go figure. My guess is Snyder would give former quarterback Michael Bishop a strong look, followed by Darren Sproles, Jordy Nelson and Mark Simoneau. He’s probably not choosing Josh Freeman.

Wilkinson is one of the greatest college football coaches in the history of the sport and won 145 games and went 93-9-3 in conference games. He also won 47 straight games from 1953-1957, a streak that is unlikely to be broken anytime soon. He’s a no-brainer at the top of the ticket. Switzer narrowly tops Bob Stoops only because Switzer would be that great attack dog vice president on the campaign trail, and Switzer has three national titles to his credit to Stoops’ one.

This ticket would have one of the most powerful political donors ever in Boone Pickens. Sanders is beloved by all and one of the greatest running backs ever. The hall of famer easily takes the top of the ticket. After that, the running mate options drop off, unless you can see Dez Bryant in the Joe Biden role. Luckily, before you do, there’s hall of famer Thurman Thomas – who if he can remember to bring his helmet to the convention – is an easy choice to be the running mate. Mike Gundy was a second choice for Sanders, because we all know he’s old enough to be president.

Patterson is the greatest coach in TCU history and runs the program with an iron fist. Tomlinson is a future hall of famer and the greatest Horned Frog of all time. This is a sneaky good ticket. Also, we’re pretty sure Patterson could recruit an athletic member of the Fort Worth City Council, apply a little coaching, change his position to secretary of state and that guy would be the next John Quincy Adams #HistoryLesson #MonroeDoctrine

I know that a Vince Young-Ricky Williams, or an Earl Campbell-Ricky/Vince ticket is powerful. But Royal-Brown looks and feels like a real-life-could-be-ticket. Royal gives that Harry “Give’em Hell” Truman vibe, while Mack has an “if Ronald Reagan and George W. Bush merged with a football” vibe to him. Yeah, Mack wasn’t well-liked by some in Texas at the end, but that’s why he’s not at the top of the ticket. Seriously, Royal-Brown even has a cool name to it.

Oh, boy. Or should I say “Ahoy?” The Pirate would definitely be an interesting presidential candidate. Controversial at times. Exciting all the time. Definitely not putting anyone in a shed during the campaign. Leach would take Thomas as his running mate because Leach’s biggest problem is his defense. Enter a borderline hall of fame linebacker to his ticket and the problems are solved.

Huff is one of the greatest football players of all time and pioneer of the game. A New York Giant legend who played in five straight Pro Bowls from 1959-1963, Huff also helped West Virginia to a 31-7 record in three years and a Sugar Bowl birth in 1954. You need someone who can contrast with Huff and someone who can dominate the media coverage just by tweeting and someone who can do super controversial things but still remain in the public eye and make millions. You want a wild card, America? You think Donald Trump and Hillary Clinton are crazy? We give you Vice President Pacman.

So whom do you vote for?