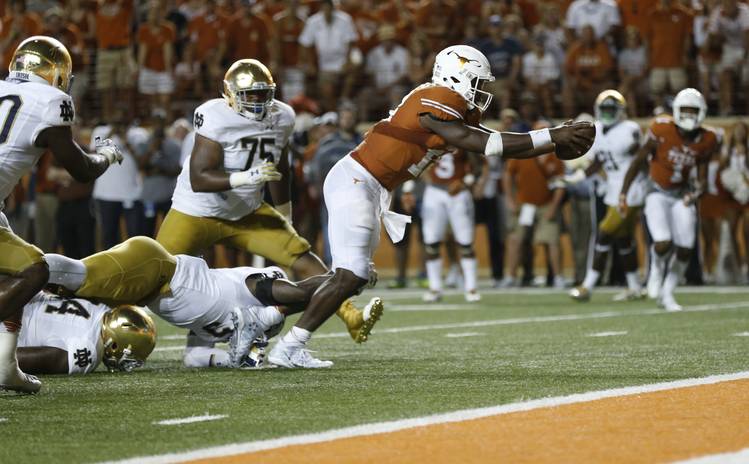 Texas quarterback Tyrone Swoopes breaks away for a touchdown in the fourth quarter to give the Longhorns the lead 37-35 against Notre Dame at Royal-Memorial Stadium on Sunday September 4, 2016. JAY JANNER / AMERICAN-STATESMAN

As far as season openers go, things couldn’t have gone much better for  Texas.

In front of a national audience, and playing in front of the largest crowd in UT history, the Longhorns upset No. 10 Notre Dame in double overtime, 50-47. The Irish joined No. 3 Oklahoma, No. 5 LSU and No. 16 UCLA as opening-week Top 25 upset victims.

Fittingly, all three Longhorns who fought for the starting quarterback job — Shane Buechele (who won it), Tyrone Swoopes (the backup and short-yardage specialist) and Jerrod Heard (now a receiver) — all played big roles in the win, as did a determined night from D’Onta Foreman and, despite the nearly 100 combined points, a spirited effort from the Texas defense and its much-maligned line.

Texas avenged last year’s forgettable road trip to South Bend, the one that ended with a 38-3 loss and caused Charlie Strong to shake up his staff days later, taking away play-calling duties from Shawn Watson and handing them over to Jay Norvell.

Buechele, Texas’ starter, passed his opening test. The freshman doesn’t need to be spectacular this year. He just needs to not make mistakes, be efficient and pick his spots. He did just that Sunday night.

Buechele was 16 of 26 for 280 yards, with two touchdowns and one interception. He also added a touchdown run. Swoopes finished with only 37 rushing yards, but his two scores were big, especially the winning one. Foreman finished with 126 yards and a touchdown on 23 carries. Burt had six catches for 111 yards and the touchdown.

For Notre Dame, DeShone Kizer was 15 of 24 for 215 yards and five touchdowns. Tarean Folston rushed for 88 yards.

How it all played out:

First quarter: Texas and Notre Dame exchanged touchdown passes on their first drives, a 13-yarder from Kizer to Equanimeous St. Brown to give the Irish a 7-0 lead, and Buechele’s 19-yarder to Armanti Foreman that tied it up. Buechele played the whole quarter.

Second quarter: The Longhorns took a 21-14 lead into the break. Swoopes scored from his 18-Wheeler package, Buechele added a short TD run and Heard  — remember him?  — produced a big 68-yard catch and run that set up Swoopes’ score. Of note for Notre Dame: St. Brown, who caught a 30-yard touchdown pass from Kizer in the quarter, had more TD catches in the first half (two) than he had total receptions in all of the 2015 season (one).

Third quarter: Things started great for Texas — Buechele hit Burt for a 72-yard bomb just 31 seconds into the half, and Trent Domingue’s 25-yard field goal gave the Longhorns a 31-14 lead. History buffs may know that since 2004, Texas is 75-0 when leading by 17 or more points in a game. But things turned quickly. The Irish began their run of 21 unanswered points, their game trending up as the Longhorns’ tailed off. Still, as the quarter ended, Texas held on to a 31-28 lead.

Fourth quarter: Both teams had their chances. The Irish took a 35-31 lead with 10:57 left on Josh Adams’ 17-yard touchdown catch, and after both teams’ ensuing drives ended in punts, Texas took over at its own 32 with 5:23 left. Buechele and Foreman efficiently moved the Longhorns down the field, and Foreman scored from 19 yards out to make it 37-35. But Domingue’s extra point was blocked, and Notre Dame’s Shaun Crawford returned it all the way for a 2-point conversion.

That tied it 37-37 with three and a half minutes left, but neither the Irish nor the Longhorns could score again.

Overtime, Part 1: Notre Dame won the toss and chose to play defense. Buechele hit Jacorey Warrick for a 20-yard gain down to the 5, and two plays later, Swoopes came in on the 18-Wheeler on a third-and-3 from the 3-yard line. Swoopes scored on a keeper up the middle, making it 44-37.

It took the Irish all of one play to answer, a 25-yard touchdown pass from Kizer to C.J. Sanders that tied it, 44-44.

Overtime, Part 2: Paul Boyette Jr. stuffed a Notre Dame run for a 2-yard loss, setting up a third-and-7 from the 22. The Irish ended up settling for a 39-yard field goal by Justin Yoon, which made it 47-44.

Texas got the ball back. Foreman ran for 5 yards, then Buechele gained 4. Swoopes came back in for the third-and-short play from the 16, and the senior bounced off two or three would-be tacklers down to the 6.

Texas was only six yards away from the win. On first-and-goal, Swoopes was stopped for no gain, but on second down, he squirted through the middle and dove across the goal line. The record crowd at DKR erupted, the Texas bench stormed the field and Strong ended up body surfing on players.

Next up for Texas: UTEP, on Saturday, at 6 p.m. It’s a Longhorn Network game.