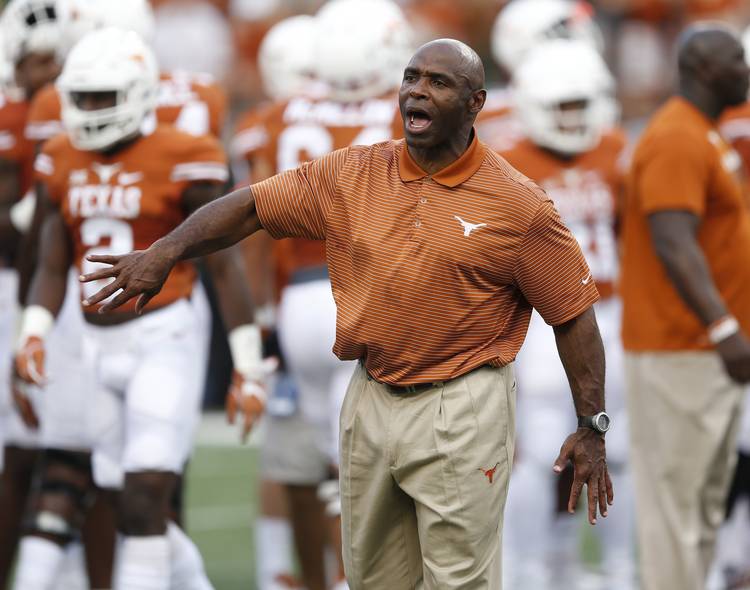 That was the overriding theme of Charlie Strong’s weekly media availability on Monday, which normally could be described as Strong’s UTEP press conference save for one minor problem: UTEP had very little to do with Monday’s press conference.

Strong’s presser lasted 33 minutes. He fielded about 25 questions. Not a single one was about the Miners, who beat New Mexico State 38-22 and had a running back rush for 249 yards. In fact, “UTEP” was mentioned only once, and it came from Strong himself, and it was only a passing reference in regards to Texas’ next schedule of games. And it came 17 minutes into the presser.

Maybe that should be expected. Texas did, after all, only finish its big season-opening win over Notre Dame less than 12 hours before. We were all tired today — Strong was asked if he took his usual pre-sunrise jog this morning, and he said no — and the buzz off the 50-47 win over the Irish was still very fresh.

Tyrone Swoopes was a hot topic Monday. So was Shane Buechele. When were they told who’d start? How did they take it? Do they support each other? And on and on. Both had very strong games, with Buechele looking sharp and showing a nice touch on deep throws, and Swoopes scoring the game winner out of his short-yardage package.

The other dominant theme of questions was more big picture. We’re trying to figure out whether what we got Sunday night is what we’ll get for the rest of the season, where this team is at in terms of confidence and focus, and whether we’re witnessing a true turning of the corner for this program or whether last night’s win was about the electricity of a new season against a Top 10 opponent on prime time TV with the largest crowd that’s ever been seen at Royal-Memorial Stadium.

“One game does not a season make,” Strong told us. “We’re still building. We want each and every week to get better and better.”

Strong said it’s too early to tell how serious right tackle Tristian Nickelson’s knee/leg injury is. He was rolled on by an Irish lineman. The play looked bad on replay; he walked off the field with some help. And ditto for guard Kent Perkins, who limped off in the second half with what looked like a possible knee injury. Safety Dylan Haines left in the second half with a concussion; Strong told Kirk Bohls that he expects Haines to be fine.

Players were given Monday off because of the late night.

Some questions and answers from Monday:

What’s different about this team from last year’s?

“You look at us on offense, the defense feels if we can get the ball back to the offense, they’ll go score a touchdown. Even in overtime when we held them, I told the defense just to hold them to 3. We’re gonna score. Now they feel like we have all three phases playing together … just the confidence they have in one another. You can see it happening.”

What we saw in terms of the quarterbacks’ usage, can that continue to work?

“We can make it work. Look at Buechele, we don’t need him running the football. He can release the ball. You have two different packages; when you get down to the goal line, (the 18-Wheeler) is a package that’s been successful for us, so we’ll continue to use (Swoopes).”

Did Swoopes surprise him?

“Nothing surprised me about him. He’s just a big, strong, physical runner. And he can throw the football, but we didn’t need him to throw it last night. It’s all about toughness and controlling the line of scrimmage. We knew we could do that.”

What’s impressed you the most about Gilbert?

“He’s so calm. He has so much confidence in himself and his system. We’re gonna score on every play; let’s just go get first downs. … The players believe in the system. It’s gonna work.”

Is this what you imagined all along (offensively)?

“We have the speed that we can speed it up with. Buechele and Swoopes, you have two guys back there that can manage that offense. We didn’t get a chance last night to really take a look at Collin (Johnson). We still have guys, weapons we didn’t play a lot of last night that can really be effective and speed this offense up.”

Did Sunday night change anything?

The biggest steps are from the first to the second game, so what’s next?

Is it time for folks to get on the boat?

“Week by week, we should continue to get better, but last night with the crowd we had, it was great to have that crowd. Each and every week we may not pack it in like that, but we’re gonna have good crowds.”