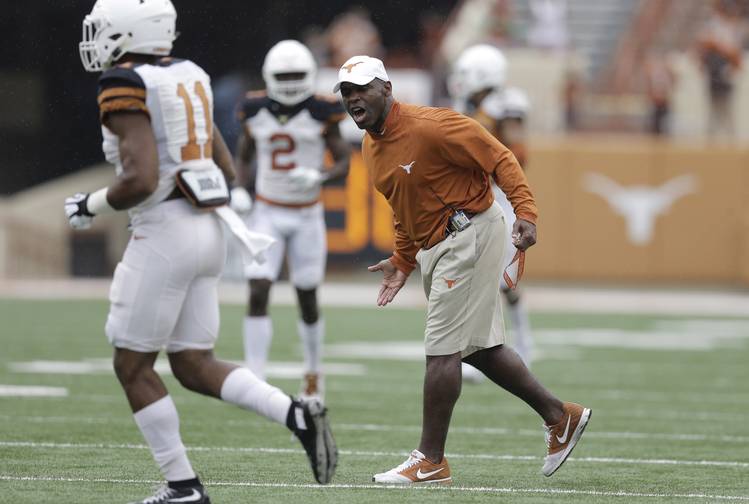 Charlie Strong’s weekly press conference has come and gone. It lasted just a shade under 30 minutes and he took about 25 questions. Not bad.

Texas is undefeated, nationally ranked and riding some momentum heading into its first road trip of the season. This morning, freshman quarterback Shane Buechele was named the Big 12’s newcomer of the week for the second straight time.

1. All the starters, Strong said, will be healthy for Cal. He specifically named guys like D’Onta Foreman and Kent Perkins, but we’re also assuming that includes Dylan Haines, Connor Williams, even Tristan Nickelson.

2. Conversely, holding so many starts out against UTEP allowed coaches to see backups get valuable playing time. Strong singled out Fox end Breckyn Hager, outside linebacker Malcolm Roach and running back Kyle Porter.

Texas is 2-0 after wins over Notre Dame and UTEP. Cal is 1-1 after an opening win over Hawaii and a loss late Saturday night at San Diego State. This will be the Bears’ home opener.

Other questions and answers from Monday:

After what happened last year at Ames, what’s different about this team now?: “It is a totally different team from last season. You have a group of seniors now who really understand what their mission is all about. They’re the ones that are really carrying the torch for us. We don’t want to look back at last season because we’re not the same football team.”

Are you relieved that this offense is playing as advertised?” “Sterlin and the offensive staff are doing an unbelievable job. What we’re talking about is playmakers, and getting the ball into your playmakers’ hands. We have been able to run the ball, we have a physical nature about us, and then throw the ball. If you want to load the box, OK, we’re going to throw it overhead. And we also can line it up and run it.”

Are you seeing confidence building?: “Our young guys have really done a great job with our older players of pulling them in. The young guys are such a reflection of their attitude. The whole attitude’s changed. They do trust one another, they do believe in one another.”

On Jerrod Heard, who had the huge game against Cal last year: “It’s been great watching him this season. Each and every day he comes to work. He always smiles. He really brings energy to the whole team. On the offensive side, there’s not a lot of guys with that personality.”

On what he’s learning about Shane Buechele: “The thing about him is he’s so calm. He has that quiet confidence about him. He’s not arrogant at all. He just carries himself the right way. He’s gained so much respect from the team and has been able to win the team over. With him, it’s not a big deal and he never makes it about himself.”

Does Foreman get the carries this week, or do you go with the hot hand?: “Foreman will be back, and those guys rotate in. You saw Chris was able to run the ball and we got a chance to see our young guy, Kyle Porter. He did a good job. You’ll see all three of them.”

On the defense: “One of our goals this summer was to hold an opponent to 13 points or less. Now, that’s really hard to do. What’s happening now is offenses are moving the football and they’re able to score points on defenses. They’re gonna move the football, they’ve been moving the football, so it’s not like we’re going to go in there and just shut them down.”

Where has this team made the most progress? “This team can always get better. Our progress on offense, the way we’re moving the ball and how well the quarterback is playing. Swoopes didn’t get much the other night just because of the type of game we were in. The leadership’s gonna come from that position. You look at how the team’s rallied behind that position.”

What did you think about Poona Ford’s penalty?” “I tell them, when you do something, just give the ball to the official and go celebrate on the sideline.”

Saturday’s game kicks off at 9:30 p.m. Texas time. It’ll be on ESPN. The Longhorns are ranked 11th in this week’s AP poll — same as last week — and 16th in the coaches poll, up four spots. Texas hasn’t been ranked as high as 11th for back-to-back weeks since the 2010 season.

Texas is 5-1 all-time vs. the Bears, the lone loss coming last year. The Horns haven’t played in Berkeley since 1969, though.