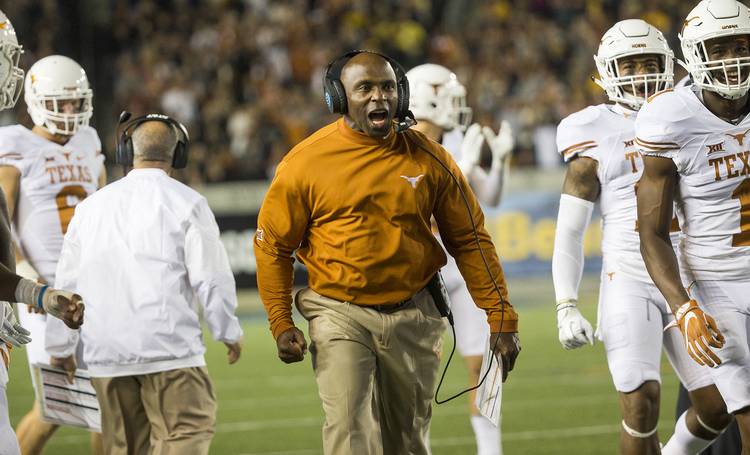 Kudos to Texas for holding a rare off-week press conference and player availability on Monday, just like a normal game week. The Longhorns announced today’s availability last Thursday — back when Texas was undefeated, ranked 11th in the country, riding a wave of regional and national excitement, and prepping for their first road trip.

Instead of heading into the off week with a 3-0 record and ranked somewhere in the Top 10, the Longhorns now have soul searching to do this week, especially after their defensive lapses that cost them in Saturday night’s 50-43 loss at Cal. Texas has given up 50 and 47 points in two of the first three games.

Charlie Strong took questions for 28 minutes, and there were clear, over-riding themes:

Strong took 29 questions. Thirteen were specifically about the defense. What’s wrong with it? How safe is Vance Bedford’s job? What will be Strong’s role with the defense be the rest of the season? Is Malik Jefferson being The Guy that Texas needs him to be? Is there still confidence in Sheroid Evans?

On to some questions:

On whether we’ll see more Breckyn Hager, more Malcolm Roach and more Brandon Jones: “I love Hager and I love Roach because I love their energy. You look at Brandon Jones … he’s all over the place. He’s someone you’ve got to get on the field. You want to see more of him. You want to see a lot of those guys. You’ll see them. They’ve earned the right to play.”

On his long relationship with Bedford, and how concerned he is: “The defense can be fixed, and I’ll get more involved. We’ll get it fixed. … We gave up just too many big plays. I told our coaching staff that was on us, big time. We could’ve gotten our players to play better. It’s accountability, and it comes back to us. The defense can be fixed. You just can’t give up the big plays we gave up and expect to win.”

On whether that means he’ll call the plays: “We’ve got two weeks to look at it, and so after two weeks, we’ll (see).”

On the team’s psyche: “I just have a different team right now. They’re much more mature now. I have a team that’s been through it; they’ve been through those tough losses. As soon as we landed, it was probably 6:45 Sunday morning, I met with them and told them we’ll learn from this. It’s a team loss. When we win, everybody’s happy; when we lose, we’ve all got a piece of the blame. The good thing about it is our conference starts now. Our goal is in front of us. We said we wanted to go win the conference, so now it’s up to us to go do it. It’s gonna be a tough conference.”

On what he needs to see these next two weeks: “Don’t say to me, ‘Well, I told him something.’ He’s either saying ‘I’m not gonna do it’ or he doesn’t care or he doesn’t understand it. There’s one thing about the players: They want success. For us, it’s making sure what you’re demanding is all about excellence and about confidence.”

After three games, Texas ranks fifth in the Big 12 in total defense, fourth in rushing defense, fifth in pass defense, last in pass defense efficiency, and is grouped dead last with Iowa State, Oklahoma and TCU with no interceptions. The Longhorns do lead the conference in sacks, though (11).