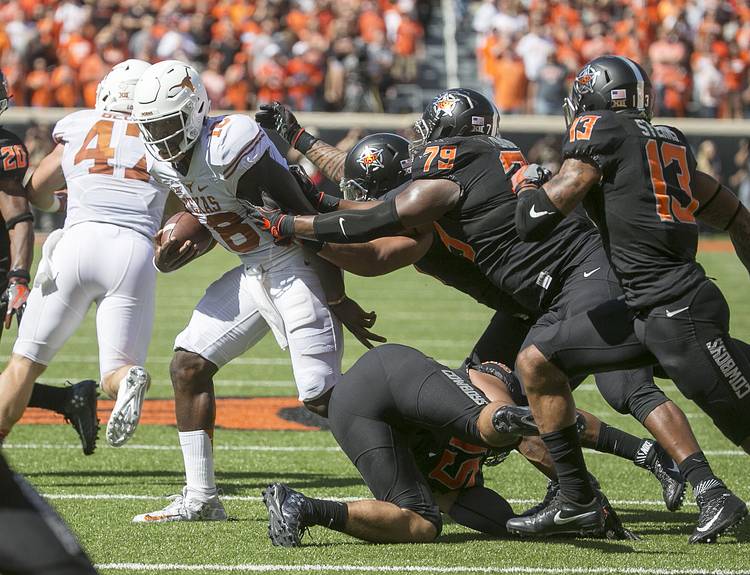 The story of the game, so far?

It appears that the Longhorns now need another off week — not to fix the defense (though it wouldn’t hurt, but more on that later), but to work on the kicking game.

So far, the Cowboys have blocked three Texas extra-point kicks and Trent Domingue has missed on his lone field goal attempt. It’s been a long day for sophomore deep snapper Jak Holbrook, a 5-10, 204-pound sophomore who’s being swept to the side by Oklahoma State’s 6-3, 310-pound defensive tackle Vincent Taylor right up the middle.

One of those Taylor blocks was returned by Tre Flowers for a 2-point runback, similar to what we saw in the opener against Notre Dame.

Beyond that, it’s been a back-and-forth shootout. The Cowboys went up 14-0 quickly before Texas’ offense and defense settled down. It’s been a steady dose of D’Onta Foreman and Chris Warren III runs, and Shane Buechele has been steady on the short and medium routes.

Those looking for a big defensive effort will need to keep looking. There have been plenty of missed tackles and a dropped interception.

How it’s all happened:

The key play: Another third-down conversion pass for a first down.

The key play: Dorian Leonard turned a quick catch at the line of scrimmage into a 51-yard play down to the 2, thanks to a Cowboys missed tackle.

The key play: Two of them — a pair of third-and-5 and third-and-4 conversions, courtesy of a Shane Buchele-to-Jerrod Heard slant pattern for 21 yards and a Tyrone Swoopes run out of the 18-Wheeler package, respectively.

The key play: A 23-yard swing pass from Buechele to D’Onta Foreman on third-and-3 was highlighted by nice downfield blocking from 6-6 freshman receiver Collin Johnson.

The key play: The scoring pass was the play — DeShon Elliot and John Bonney looked confused in coverage.