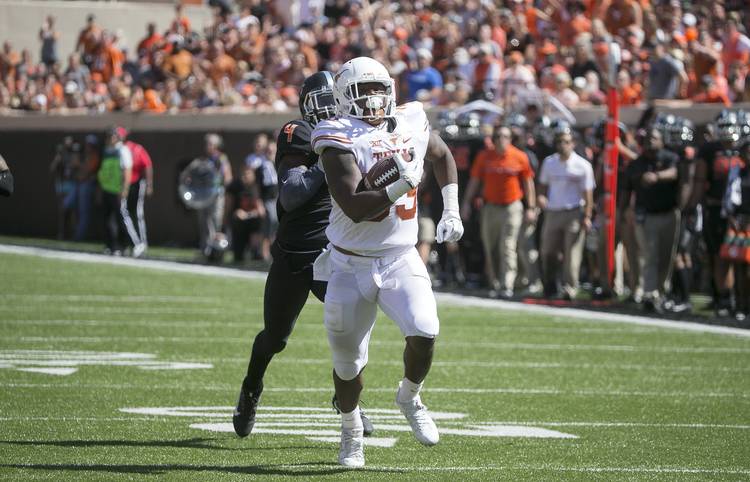 The tight end position emerged — if only for a moment — when Andrew Beck caught a 39-yard touchdown pass from Shane Buechele in the second quarter. It was the first catch by a Texas tight end this season.

It was a day to forget for the Texas PAT team, which allowed three blocked extra points off the foot of Trent Domingue. Defensive tackle Vincent Taylor blocked two and actually pitched to Tre Flowers after scooping up the first. Flowers went the distance for two points, the second Texas opponent to do so in 2016.

Faced with a third down deep in his own territory in the third quarter, Buechele threw into double coverage, where Jordan Sterns was waiting to intercept. The subsequent return led to Barry J. Sanders’ 1-yard touchdown run that put the Cowboys up 43-25.

D’Onta Foreman showed off his jets with a 62-yard touchdown run in the third quarter, but may have injured his side on a late hit in the end zone. He came out of the game on Texas’ next series and did not return. He said after the game that he  expects to play against Oklahoma, though.

On a day of few defensive highlights for Texas, safety Jason Hall came up with two sacks, including one for a six-yard loss that halted an OSU drive inside the Texas 40 in the third quarter.