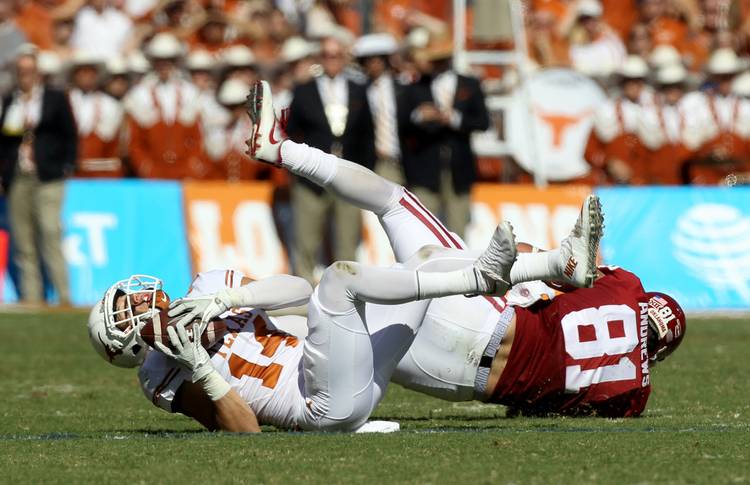 UT safety Dylan Haines, left, makes an interception against OU wide receiver Mark Andrews in the first half at the Cotton Bowl in Dallas, Saturday, Oct. 8, 2016. (Stephen Spillman / for American-Statesman)

Freshman wide receiver Devin Duvernay scored the first touchdown of his career, a 63-yarder that gave Texas the lead in the third quarter.

The third quarter proved to be Texas’ undoing defensively. Oklahoma scored 21 points in the period and averaged 13.7 yards per play.

Texas cornerback Davante Davis got scorched by Dede Westbrook on a 71-yard touchdown strike, the longest touchdown catch in the Texas-OU series history.

Westbrook, who finished with 232 yards on 10 catches, burned the Texas secondary for his second touchdown of the day on a slant route that covered 47 yards. It put OU up 35-27.

Texas was threatening to score again late in the third quarter, but OU’s Will Sunderland stepped in front of Armanti Foreman and intercepted Buechele at the Sooners’ 7-yard line. OU followed that with a 93-yard touchdown drive to go up 42-27.