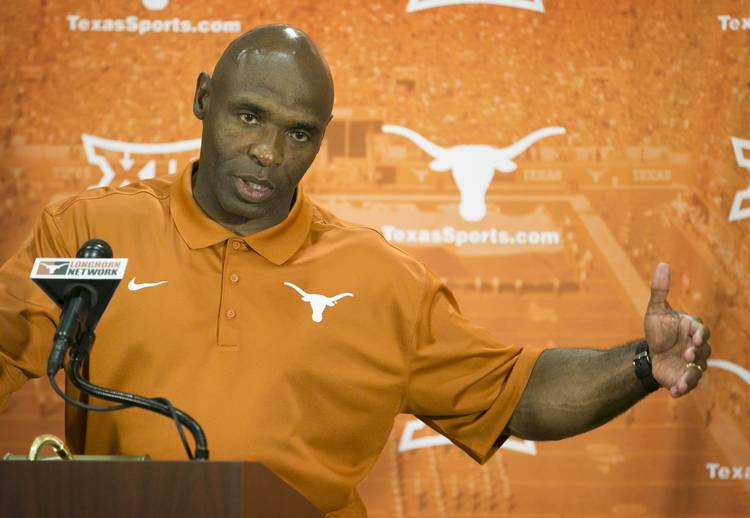 Here are the bigger talking points:

On to some specific questions and answers:

Defense came up a lot.

On how important it is to play good defense on the road, which so far hasn’t happened: “We have not played well on the road, at Cal, in Stillwater, even in Dallas we didn’t play well. The defense has to come alive. If you don’t give up the big plays and don’t let the crowd into the game, you’ll get those stops. When you’re on the road, it’s all about discipline and playing within yourself. Just play your position and do your job.”

On his own involvement with the defense, and how that may be eating into his other duties: “It hasn’t taken we away from other duties. I’m in meetings, so whenever we decide what we’re gonna do defensively, I tell our guys this is what we’re gonna do, so we go step by step — what we expect from the front, from the ‘backers and from the secondary. Then we’ve gotta put it all together so when you do install it, you make sure everybody’s on the same page with the same voice.”

Oh, and about those wristbands you may have noticed on the arms of Strong and defensive players. Those were installed to help with communication on the field as offenses make adjustments on the line. Expect to see those continue to be utilized; Strong said they helped “tremendously.”

Some specific players came up as well.

Kai Locksley: “Kai and I had a conversation about a month ago. He felt he needed to go somewhere else. Out of respect to him, I told him to go take care of his academics so that wherever you do transfer, you’ll have a good enough GPA so it won’t be an issue.”

Kris Boyd: “He comes with a different attitude, but plays that way the whole game. He plays with so much energy. You’ve got to calm him down, taper him down.”

Devin Duvernay: “Usually in this scheme, for a young guy it takes four to five weeks and now you’re beginning to see that with him. He’s always a deep threat because he runs by people. He’s going to be an outstanding player.”

Naashon Hughes: “Naashon has tremendous athletic ability. He just needs to play like that all the time. It was a good challenge for him, when you look at Hager and Roach. You watch how hard those two guys go. He’s seeing that. I was so happy to see him have that success. He needed that. You take another step and you’ll go there. That’s what he was able to do.”

D’Onta Foreman: “He just plays so hard. You watch him now without Chris Warren the last two weeks. He had 30 carries the other night and he probably could’ve had another 10.”

On how much time is being spent on the Iowa State win: “You’ve gotta just keep moving forward. It’s all about now. We’ve gotta get that game behind us. It’s time to move on.”

On what he really likes about this team, six games in: “I really love our kids, I love our football team, I love the way they responded through so much adversity. They keep their heads down and they go to work. Usually when you have a young team and the issues we’ve had, it becomes a part of the team. That hasn’t happened with this group.”

On the challenge of playing in Manhattan: “That’s a tough place to play. It’s always a sellout crowd and the fans are really into it. Their student section comes pouring into the stadium when we’re warming up, and they’re right behind us. You can’t listen to their chants. You’ve gotta go in and play, which is what we haven’t done. When you allow them to make plays, you allow the crowd to get involved.”

On what to expect from Kansas State: “They grind it out. On offense they’re not pretty, but they’re gonna run the ball, gonna get their first downs. It’s like they’re so patient in what they do, it puts so much pressure on the defense. A lot of times, teams are looking for a quick strike. They’re not. They’ll just grind out the clock for however long it takes to go make a score. They get that first down and then they get another first down, and before you know it, they’re in the red zone.”

Saturday’s game kicks off at 11 a.m. at Bill Snyder Family Stadium. It’ll be carried by ESPN2. Texas, still looking for its first win away from Royal-Memorial Stadium, is 1-6 all-time in Manhattan.