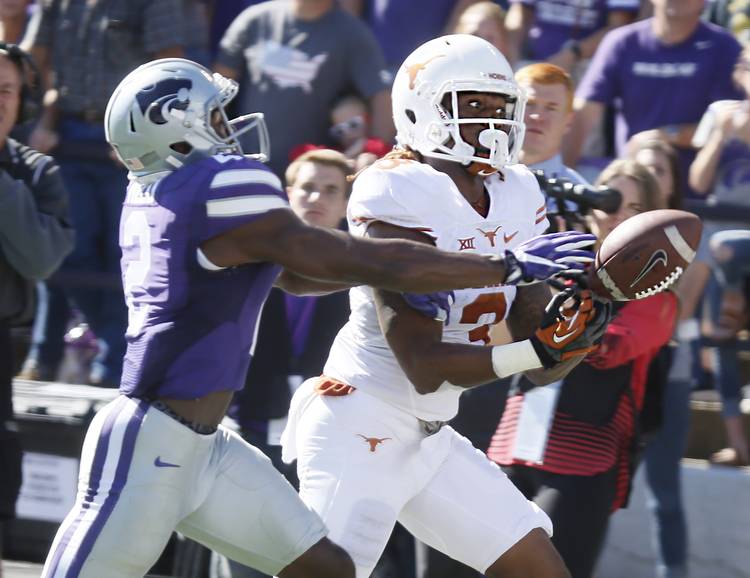 Texas #3 Amanti Foreman cannot get his hands on a TD pass under pressure from Kansas St DJ Reed during the fourth quarter of the Longhorn’s games against Kansas State in Manhattan, KS Saturday October 22, 2016 at Bill Snyder Family Stadium, Manhattan, Kansas. RICARDO B. BRAZZIELL/AMERICAN-STATESMAN.

It’s over in Manhattan.

Maybe that’s not too big of a surprise. The Longhorns struggle in Manhattan like few other places in the country. They’re now 1-7 all-time there, the lone win coming 16 years ago.

In fact, Texas just hasn’t been a road game as a whole. And that goes back three seasons. In the Charlie Strong era, Texas is 5-12 in games played away from Royal-Memorial Stadium. That includes road games and neutral site games, like the Texas Bowl loss to Arkansas, the loss to UCLA at AT&T Stadium and the losses to Oklahoma at the Cotton Bowl.

Why did Texas lose? It was a team effort. The defense did force three turnovers and shut things down well enough in the second half, but still gave up three touchdowns to one of the Big 12’s lower-rated offenses and displayed what looked like unfocused sloppiness, particularly in the first half with missed tackles and bad angles. Special teams did its part in the loss, too; Trent Domingue’s missed 35-yard field goal with four minutes left and Texas trailing by 10 proved to be a real killer late in the game. And the offense, ironically enough, sputtered. The 21 points were a season-low, and Texas was unable to capitalize on those Wildcats miscues.

Shane Buechele was 17 of 24 for 222 yards and two touchdowns. Collin Johnson (4-22) was Texas’ leading receiver in terms of catches, though Devin Duvernay’s lone catch was a big one (an 80-yard touchdown).

Foreman. Another game, another 100 yards. He’s in a really good groove.
Duvernay. All he does is catch long touchdown passes. And that’s perfectly OK.
Anthony Wheeler: A huge strip at the goal line took away seven points from the Wildcats.
Edwin Freeman: Two forced turnovers, one on an interception, the other a forced fumble. Both were committed by K-State quarterback Jesse Ertz.

The offense, as a whole.
The coaching. Let’s point fingers at Sterlin Gilbert and Charlie Strong. Why throw it on third-and-1 in the second quarter, when you’ve got Foreman right there to use? How can the defense not be prepared for a fourth-and-1 try from Kansas State — coming out of a timeout? The Longhorns didn’t look set for that play, which the Wildcats converted, of course.
Those dropped passes. Talking to you, Dorian Leonard and Armanti Foreman.

On deck for Texas: Baylor, next Saturday, at Royal-Memorial Stadium. Kickoff is at 2:30 p.m., but we haven’t heard about TV yet.