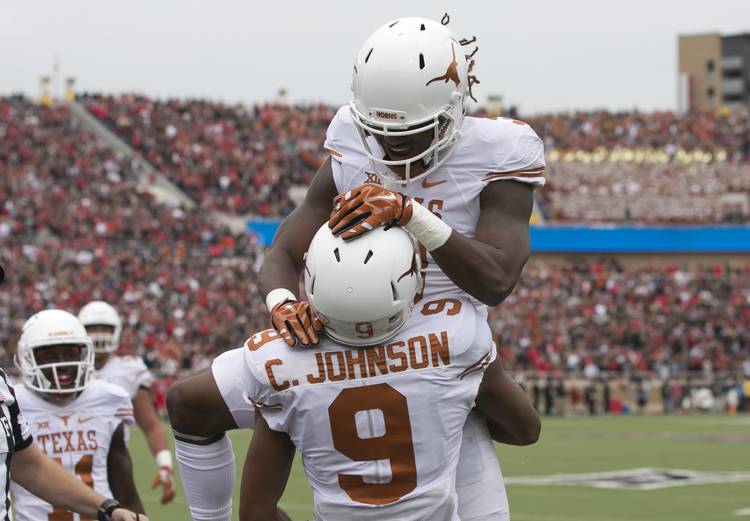 This has the looks of a back-and-forth afternoon with two offenses that are having few problems moving the ball. It’s going to be a long day for both defenses. We’re likely going to see some impressive offensive numbers for both sides. This game turned pretty much on one play that went Texas Tech’s way, but the Longhorns have fought back to take the 1-point lead at the break.

Texas, trailing 16-14 in the second quarter, drove to within scoring range. Tyrone Swoopes, in for the 18-Wheeler package, shocked everyone by throwing a pop pass. Caleb Bluiett was wide open and waltzed into the end zone for a short touchdown catch. But Kent Perkins and Zach Shackelford were flagged for a chop block on the play, and it backed Texas up. Soon, the Longhorns faced a third-and-26, and Sterlin Gilbert called a brilliant draw play by D’Onta Foreman, who burst up the middle, made a nice move around the 15-yard line and then picked up a pack of Texas blockers and Tech defenders, who gang-piled him forward five yards toward the end zone, closer, closer, closer until … Douglas Coleman stripped him of the ball inches from the goal line, then returned it the length of the field for a 100-yard fumble-return touchdown.

The play was reviewed, but it was ruled that Foreman had not broken the plane of the end zone before the ball came out. So a 21-16 Texas lead became a 23-14 Texas Tech advantage.

That one play stands out in what has been a defensively-challenged matchup.

Shane Buechele and Patrick Mahomes II are having big days. As expected, both are picking apart the other side’s defense. Buechele began the day 7 of 7 for 107 yards, and at the break is 16 of 30 for 199 yards and two touchdowns. Mahomes, the nation’s leading passer, is 17 of 24 for 192 yards and two scores.

Foreman had a big 55-yard run late in the first quarter, and it put him over the 100-yard mark for the day. It’s his 10th straight 100-yard game going back to 2015, and that’s one 100-yard game away from tying Earl Campbell’s school-record streak of 11 games, set back in Campbell’s Heisman Trophy season of 1977.

Texas has yet to sack Mahomes.

Defensive tackle Poona Ford was shaken up after making a tackle on Texas Tech’s second drive, but he returned.