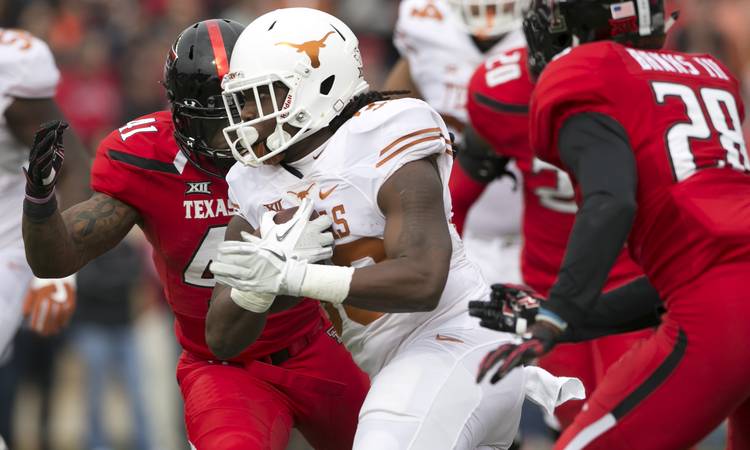 Trailing 23-14 midway through the second quarter, Texas rallied for 10 points in the final three minutes of the first half on a beautiful, 8-yard touchdown reception by Collin Johnson — the second of the day for the talented freshman — and a 24-23 halftime lead.

Texas took command of the game with a crisp scoring drive to start the second half, marching 75 yards in 11 plays with Tyrone Swoopes running it in from the 4 for a 31-23 lead. The Longhorns, going back to the second quarter, had scored 17 points on  three drives.

Despite one of his best runs ever, D’Onta Foreman was stripped of the ball at the end of what appeared to be a 24-yard touchdown run in which eight Texas Tech players had chances at him. Tech’s Douglas Coleman grabbed the ball and went 100 yards in the opposite direction for a controversial touchdown (even if replays clearly showed he stepped out of bounds at the Texas 2).

Texas Tech took the opening kickoff and marched 75 yards in nine plays as Pat Mahomes connected on 6-of-7 passing for 63 yards and a 4-yard scoring pass to Cameron Batson. The Longhorns have allowed an opening touchdown on the opponent’s first series six times in nine games this season.

Texas allowed Texas Tech punter Michael Barden to skirt around left end on a fake punt for 25 yards and a big first down to prolong a scoring drive that drew the Red Raiders to within one, 31-30 midway through the third quarter.

Foreman, capping his best game as a Longhorn, broke off a 74-yard touchdown run, losing a shoe in the process for a score that put Texas ahead 45-30 early in the fourth quarter.

With 16 seconds left in the game, sophomore cornerback Kris Boyd picked off Mahomes in the end zone, denying Texas Tech a chance to tie the score with a touchdown and a two-pointer to force overtime.