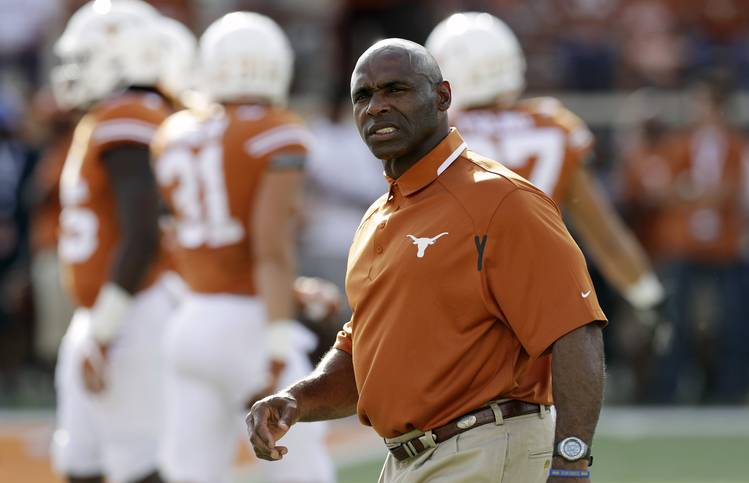 It was an interesting 30 minutes. Texas, winners of two straight over Baylor and Texas Tech, has some momentum after those two games — a win over a top-10 team at home and finally breaking over the hump with a first road win — and is facing West Virginia on Saturday. The Mountaineers (7-1, 4-1) are ranked 11th in the country by the Associated Press, which means the Longhorns, who have won four straight games vs. teams ranked in the top 12, have the chance to (a) become bowl-eligible, (b) win a third straight game, knowing that this game is at Royal-Memorial Stadium, where they’re 4-0 this season which includes a pair of wins over top-10 teams in Notre Dame and Baylor.

Yet Monday’s presser included three different attempts to get him to discuss Sterlin Gilbert’s use of D’Onta Foreman on those back-to-back third-and-2 and fourth-and-1 plays late in the game in Lubbock. The Longhorns went with Tyrone Swoopes and the 18-Wheeler package on both plays while Foreman, who had already gone over the 300-yard mark, watched from the sideline.

Swoopes was stopped short both times, and it gave Tech — trailing by eight points — one last chance to tie the game, starting at its own 26. Fox Sports 1’s Tim Brando, calling the game, noted that it was the kind of decision “that can get a coach fired.”

But Monday, Strong was steadfast in his defense of Gilbert, Swoopes and the 18-Wheeler, which has in large part sputtered since the nice showing in the season opener against Notre Dame.

Two questions later, however, the use of Foreman on those two plays came up again.

“The play was set up,” Strong answered. “We’ve had success in that package. Tyrone can go get a yard and drop his pads and run over people.”

Then, two questions after that response, the 18-Wheeler and play-calling came up again from our own Cedric Golden, who remarked that the only two people at Jones AT&T Stadium that could have stopped Foreman on Saturday seemed to be Gilbert and Strong himself.

“One thing about D’Onta, he’s not one of those guys into records,” Strong said. “He didn’t even know how many yards he had till I said something to him after the game. … That package is a solid package for us.”

The takeaway? Strong thinks all is fine with the 18-Wheeler, and it’s not going away.

On to some other Q&As:

On guarding against complacency: “We’ve got a good opportunity coming in and we’re back at home, and we play very well at home. They’ve won on the road now, so now it’s just getting ready for the next one. Winning those two has been a confidence builder. Let’s not take these two for granted, and go out and get it done.”

On what it currently feels like, to be inside the program: “The kids are getting a lot of confidence. Defensively we know we could have played better. It’s good that we ended the Baylor game on the field (defensively), that gave us some confidence. Then it was good that  we won on the road. That gave them more confidence. Even the kicking game, you’re seeing some confidence right now.”

On Texas streak vs. top-12 teams: “We’re at home and they expect to play well at home. We will have the crowd behind us. … Our players know where these teams are ranked. They know how well they need to play to go win the football game.”

On why the defense is playing more aggressively these past couple of weeks: “We have some really good coaches. It’s not me. Look at Vance and look at our secondary; he came in and has his hands on it, and we’re not giving up the home runs. We’re playing a lot more aggressive because we’re playing a lot more man coverage. … With pressure, we’re coming on more on second, coming on third down for sure. You’ve just got to make the ball come out of the quarterback’s hands, you can’t let them set up the play. … We’ve still got a long way to go, we can improve. Our tackling needs to improve, and we need to make sure we get off the field on third down.”

On what’s clicking with the secondary: “When you have had enough bad happen to you — the ball thrown over your head, not in position to make plays, not hearing the right checks — what we’ve done on defense is just simplified the coverages. Either we’re gonna get him (in man coverage) or back away and play some zone. It’s one of two things. They’re seeing routes develop in front of them and keeping everything in front of them.”

On Shane Buechele’s lack of freshman mistakes so far: “The thing Sterlin has done with Shane, he’s built an offense not putting everything on him. The running game, the offensive line is doing a great job of blocking for people. Now (defenses) want to load the box and stop the run, and he’s good enough where he throws a great deep ball. Nothing really bothers him. He knows he has enough around him. It’s an offense that really has had a lot of success because a lot of people are playing well.”

On the impact Michael Dickson is making: “It’s really big. He’s certainly a weapon for us and has done a great job. Twice Saturday he almost outkicked the coverage. I tell him all the time, you don’t even know how strong your leg is. He’s a big-time weapon for us.”

Saturday’s game kicks off at 11:05 a.m. It will be another FS1 game. Texas and West Virginia have played only five times; the Mountaineers lead the all-time series 3-2, though the Longhorns have taken two of the last three.