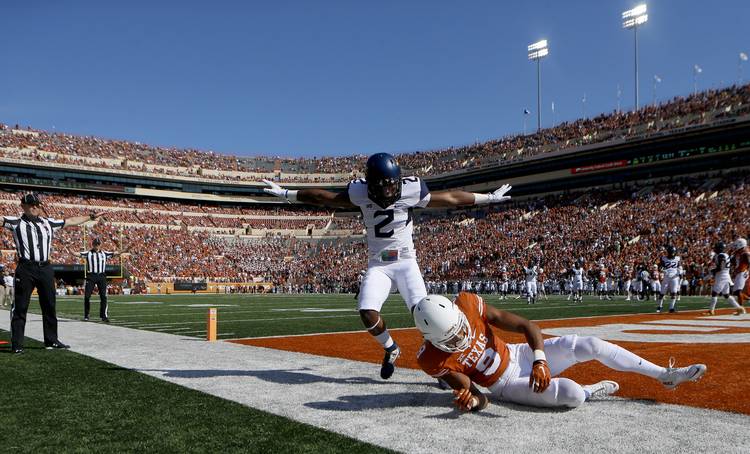 There are three streaks of note in play today: Texas’ 4-0 record at home, its four-game winning streak vs. teams ranked in the AP’s top 12, and D’Onta Foreman’s attempt to tie Earl Campbell’s streak of 11 straight 100-yard games, a streak that goes back 39 years.

Foreman has already caught Campbell. He has 114 yards so far, on 20 carrries. As far as the streaks against top-12 teams and the run of home wins, we have two more quarters to find out.

1. West Virginia’s defense is legit. The thought was that this would be the best defense Texas will face during the regular season, and so far, that’s playing out. Three of Texas’ first five drives resulted in punts, and a fourth ended with a lost fumble.

3. Which offense will we see in the second half? The one that misfired in the first quarter or the one that controlled the last half of the second quarter, with 10 points, including a field goal drive that lasted 21 plays and nearly 7 minutes of game clock.

The game started with a new wrinkle. Texas won the opening coin toss, and in a reversal of what it’s done every other time this season, chose to take the opening kick. It led to an opening-drive field goal, though Shane Buechele twice missed Collin Johnson in the end zone.

Malcolm Roach’s sack forced West Virginia to settle for a game-tying field goal on its first series, the first of two big first-half defensive plays for Texas. After Foreman fumbled at UT’s own 17-yard line on the Longhorns’ second series, Anthony Wheeler and Kris Boyd combined for a stripped-ball fumble recovery, giving Texas new life at its own 13 and taking away potential points for the Mountaineers.

Texas, though, isn’t clicking offensively. Buechele, who’s 14 of 22 for 113 yards, has looked a little fuzzy on his throws. He connected with Dorian Leonard for a 29-yard gain on the opening drive, but that was all Leonard; Buechele led him too much, but Leonard made a nice effort of extending his arms to grab it, then rambled down to WVU’s 35.

Horns up: Jason Hall knocked WVU receiver Shelton Gibson — the Mountaineers’ leader in TD catches — out of the game in the first quarter on a big hit in front of the Texas sideline. Foreman’s yards are harder to come by today, but he’s getting them.

Horns down: Foreman fumbled. Tim Cole was flagged for a 15-yard unsportsmanlike conduct penalty on a punt, which helped WVU with field position on what turned out to be a touchdown drive and 17-3 lead. Malik Jefferson was hurt late in the first quarter, taken to the locker room for observation, and has been ruled out for the game. It possibly could be a concussion. Caleb Bluiett was flagged for holding, which sabotaged Texas’ first drive of the second quarter. Andrew Beck went down with an apparent knee injury midway through the second quarter.

Here’s how the scoring has gone:

The key play: Dorian Leonard extended to make a nice grab on a pass that led him just a bit too much. The 29-yard grab and run moved Texas to WVU’s 35.

The key play: Texas declined a first down holding penalty, taking a 3-yard loss on the play instead, giving WVU a second-and-13 at UT’s 29 rather than a first-and-20 at UT’s 36. The touchdown came on the very next play.

The key play: D’Onta Foreman’s 32-yard run down to the 18 put Texas into scoring position.

The key play: Texas talked about it during a timeout, but opted not go for for it on fourth-and-1 from WVU’s 2 with 7 seconds left.

Golden: Texas down at the half but in good position to get this win