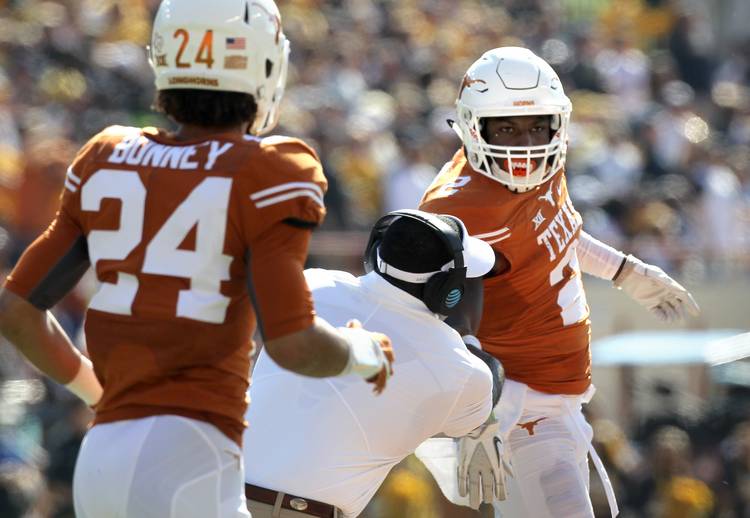 Senior safety Dylan Haines picked off two West Virginia passes for his third and fourth interceptions of the season, catching one in the end zone, as the Longhorns grab three interceptions in the third quarter alone.

Nickel back P.J. Locke III made a key interception to stop West Virginia’s opening drive of the second half in Longhorns territory.

Cornerback Kris Boyd stripped West Virginia’s Justin Crawford of the ball after a run inside the Longhorns’ 10-yard line for a big turnover to deny the Mountaineers a first-quarter score.

Referee Dan Romeo inadvertently left his microphone on after a penalty that negated a West Virginia fumble recovery on a punt, picking up a quote from angry WVU coach Dana Holgorsen, who said, “Our guys got bigger balls than their guys.”

Texas suffered three turnovers — two in the second half — and had a 37-yard field goal blocked on the Longhorns’ opening series of the third quarter.

Facing a third-and-9 at the Texas 26, Skyler Howard saw a six-man rush by the Longhorns and found Shelton Gibson on a skinny post inside Kris Boyd for a 23-yard gain to the 3. Kennedy McCoy ran it into the end zone on the next play for a 24-13 lead.

Mountaineers safety Kyzir White, blitzing from the right side, came through untouched and nailed Texas quarterback Shane Buechele in the chest, knocking the wind out of him and dislodging the ball for a West Virginia recovery at the 20-yard line with Texas poised to kick a field goal.