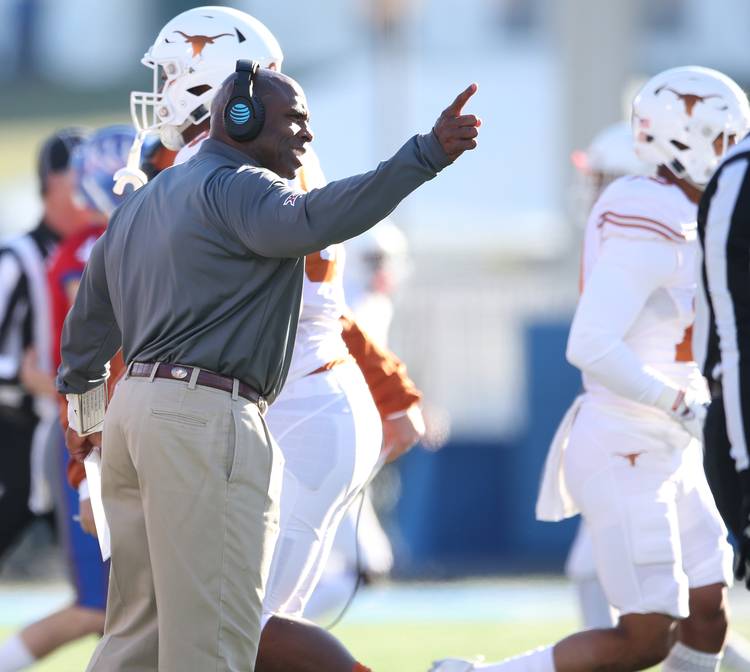 LAWRENCE, Kan. — There’s plenty of football left but the Texas Longhorns have their hands full against one of the worst football teams in America.

Right now, it’s so.  The Horns need a win to become bowl eligible but the Kansas Jayhawks apparently didn’t get the memo that they’re a 23-point underdog at home.

Texas trails 10-7 at the half and just played one of its worst halves of the Charlie-Strong era and gave life to a program that hasn’t breathed since Mark Mangino left town.

With stories circulating that there’s heavy pressure on the Texas administration to replace Texas with Houston’s Tom Herman, the Horns haven’t delivered just yet against a team that’s 2-50 in its last 52 Big 12 games.

It started out like a cakewalk but it’s been anything but.

Shane Buechele connected with Jacorey Warrick on a 75-yard catch-and-run for a touchdown on the game’s first play from scrimmage but that was it for a while. Buechele briefly left the game after injuring his neck on a scramble but returned a series after Tyrone Swoopes coughed up a fumble. Thankfully for Texas, the defense held strong on a fourth-down attempt.

After the fireworks of that first play, Boo Jr. didn’t play well with a pair of ill-advised throws including an interception that Brandon Stewart returned for a touchdown.  It was one of four consecutive Texas turnovers in the second quarter, just an unfathomable stat considering the level of competition. Offensive coordinator Sterlin Gilbert came out with a pass-heavy game plan that just didn’t pop. D’Onta Foreman was bottled up with 61 yards on 13 carries, pedestrian by his standards. Adding to the day’s frustration, he has lost a fumble,

Because they slept-walked through the first quarter, the Horns have given the 1-9 Jayhawks belief. As a result, this is the most crucial second half of Strong’s coaching career.