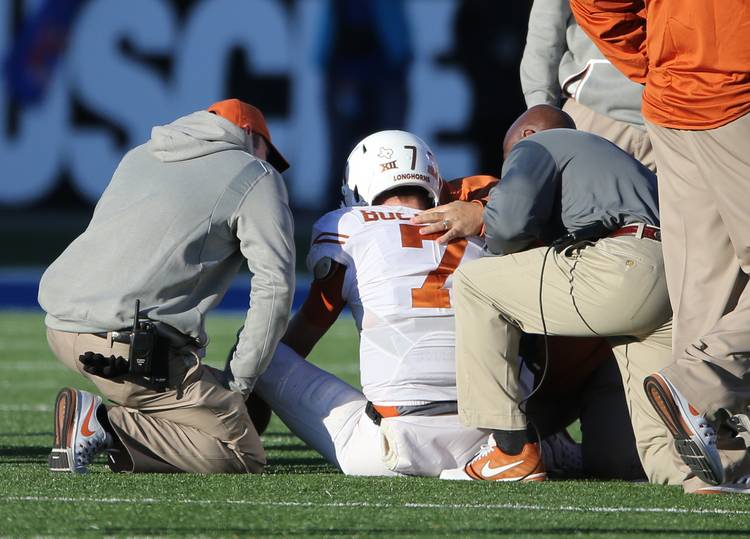 Texas's #7 Shane Buechele is down on the field during the second half in Lawrence, Kansas on Saturday, November 19, 2016. DEBORAH CANNON / AMERICAN-STATESMAN

And Texas is facing its nightmare scenario: The Longhorns — 24-point favorites — are trailing the 1-9 Jayhawks, 10-7.

Let’s get the good out of the way first: Kansas won the coin flip and chose to let Texas start on offense. Bad decision. On the Longhorns’ first play, Shane Buechele’s 5-yard toss to Jacorey Warrick turned into a 75-yard touchdown play when Warrick got past his defender and sprinted the final 70 yards.

Now, the bad: From there, it’s been all downhill for the Longhorns.

After that opening score, this is how Texas’ next nine drives went:

Interception return for a TD.

The Jayhawks tied it on a 55-yard pick six off a Buechele interception, then took the three-point lead on a 36-yard field goal after D’Onta Foreman lost a fumble.

Buechele, who missed a series after suffering a neck injury on a hard tackle, is 11 of 17 for 128 yards and two picks, along with that 75-yard touchdown to Warrick. On that one series he missed, Tyrone Swoopes lost a fumble.

Time of possession is just about equal. Texas has committed four turnovers. The Longhorns have 189 yards of total offense.

How the scoring has gone:

The key play: Warrick, after a quick 5-yard completion, made his defender miss and sprinted downfield for the final 70 yards of the touchdown play.

Golden: Horns haven’t shown up in Lawrence, Strong under fire