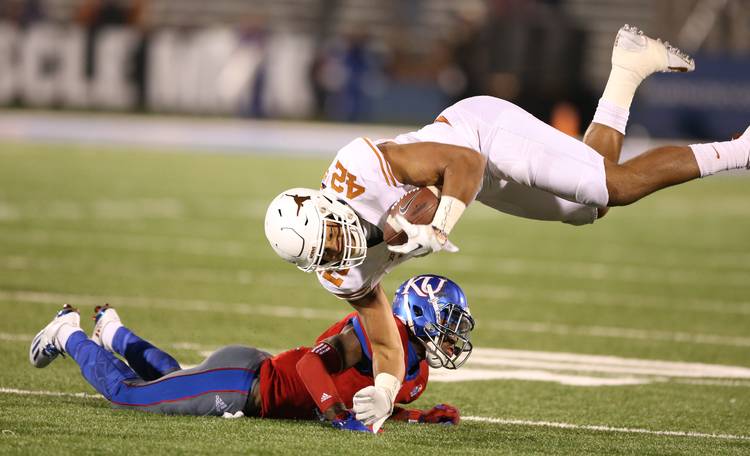 Texas's #42 Caleb Bluiett flies through the air over Kansas's #11 Mike Lee during the second half action in Lawrence, Kansas on Saturday, November 19, 2016. DEBORAH CANNON / AMERICAN-STATESMAN

It’s all over in Lawrence.

Define “it’s all over” how you want. Texas’ bowl chances, Charlie Strong’s job, the Longhorns’ chance at a winning season — all that’s on the table for discussion because the Kansas Jayhawks have just knocked off Texas in overtime, 24-21.

“When you have blown opportunities that we have, it’s hard to win a football game,” a clearly shaken, stunned and endangered Charlie Strong said to open his post-game press conference.

The loss means Texas (5-6, 3-5) now has to beat TCU next Friday in order to become bowl-eligible or miss out on the postseason for the second straight year. But in the bigger picture, it may cost Strong his job. It was widely speculated that Strong would probably return for 2017 if Texas could become bowl-eligible and not lose to Kansas. Now neither may happen.

Things ended dramatically. In the first turnover, Kansas packed the box to focus on D’Onta Foreman, who started the extra period with 250 yards. But after he was stopped for no gain on first down, Shane Buechele threw his third — and costliest — interception of the game to seal Texas’ fate.

Buechele wanted to go to Armanti Foreman, who was in man-on-man coverage on the left, but ended up rolling right and overthrew an open Dorian Leonard on the run. Kansas corner Mike Lee picked it off, giving the Jayhawks their improbable chance at the upset win.

Texas had six turnovers. The defense played well enough, but the offense suffered through a first-half malaise that’s hard to explain. Yes, Foreman Foreman broke Earl Campbell’s 39-yard school record with his 12th straight 100-yard game. And yes, it was another good day for the defense.

But how did it happen?

Texas trailed Kansas at halftime. The Longhorns were 24-point favorites, and certainly looked the part when Shane Buechele and Jacorey Warrick connected on a 75-yard touchdown play on the very first play of the game, but things went south after those first 11 seconds.

Texas committed four turnovers in the first half — a pair of Buechele picks and fumbles from Foreman and Tyrone Swoopes. And Swoopes was playing because Buechele gave everyone a scare after a hard tackle at the end of a scramble; it was a neck stinger, and he missed a series to be evaluated in the locker room.

Texans made plays in the first half. Just not Longhorns. Kansas corner Brandon Stewart, a senior from Cedar Hill, returned a Buechele interception 55 yards to tie the game at 7-7. Defensive end Dorance Armstrong, a sophomore from Galena Park North Shore, made two big plays. Steven Sims Jr., among the Big 12 leaders in catches, receiving yards and touchdown catches, scorched the secondary for a 33-yard play.

But whatever was said, or screamed, at halftime must have worked. On the opening drive of the second half, John Bonney tipped a Carter Stanley pass high into the air, and Edwin Freeman — who in the first half had dropped an interception on a similar high-into-the-air tip by Naashon Hughes — picked it off, setting up a short drive ending with Foreman’s 2-yard touchdown run, giving Texas the lead again at 14-10.

Texas forced two turnovers in the third quarter. Freeman’s pick led to a Foreman touchdown, and a LaQuivionta Gonzalez fumble recovered by DeShon Elliott near the end of the third led to Foreman’s second touchdown early in the fourth.

But Foreman’s second fumble of the game was a costly one, giving Kansas — trailing 21-18 with 3:43 to go — a chance, taking over at its own 13-yard line. Carter Stanley scrambled for 21 yards, but the drive stalled when Steven Sims was stopped four yards short of the first down on a open-field tackle by John Bonney. That led to fourth-and-6 with 2:40 left, and Jayhawks coach David Beaty called timeout after he’d initially ordered the punt team on.

On fourth-and-6 at KU’s 37, Stanley threw incomplete over the middle.

Texas could have sealed the game, but didn’t. The Longhorns, faced with a fourth-and-5 decision at Kansas’ 32, went for it rather than attempt a long Trent Domingue field goal. But Foreman was stopped short.

Kansas, needing a field goal to tie or a touchdown to win, started at its own 29. Stanley hit Kinner for 8 yards to the 37, then found Kinner again for a 26-yard gain down to Texas’ 37. Freshman linebacker Jeffrey McCulloch was called for a 15-yard roughing the passer penalty on the play — his second of the game — and it moved Kansas into field goal range at the 19.

Still, even then, Texas had a chance to end it. Stanley took one shot into the end zone, throwing it to Stanley Sims. But Kris Boyd appeared to pick it off; however, Sims managed to knock the ball loose before Boyd could control it on the ground.

That gave Kansas, with 7 seconds left, the shot to tie it up with a field goal, which Wyman did.