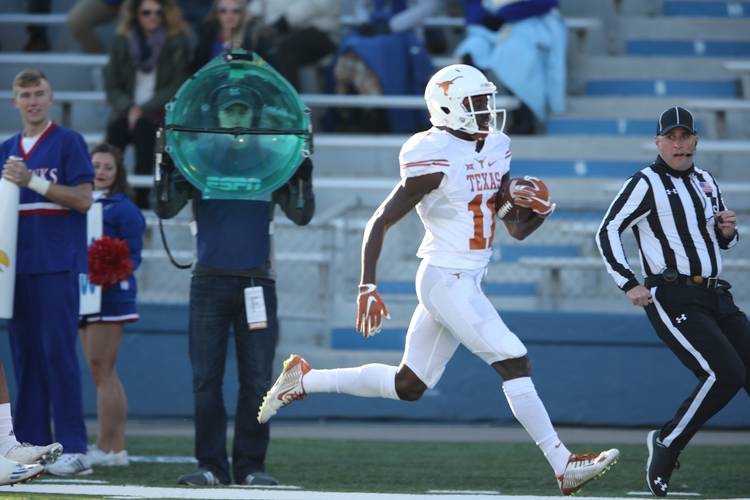 Texas' #11 Jacory Warrick runs for a TD during the first half in Lawrence, Kansas on Saturday, November 19, 2016. DEBORAH CANNON / AMERICAN-STATESMAN

D’Onta Foreman did lose two fumbles, but the nation’s most productive rusher broke Earl Campbell’s school record with his 12th straight 100-yard game.  He carried the ball a school-record 51 times for 250 yards and two touchdowns.

The defense gave up only three points and 157 yards through the first three quarters before the Longhorns’ fourth quarter/overtime collapse.

Senior kicker Trent Domingue missed a 31-yard field goal in the third quarter.  The state of Kansas hasn’t been the scene of Domingue’s best moments; he also missed a costly 35-yard attempt in the fourth quarter of a 3-point loss to Kansas State. This one, however, turned out to be humongous.

It didn’t take long. Jacorey Warrick turned a simple 5-yard hitch pass from Shane Buechele into a 75-yard catch and run for a touchdown on the game’s first play from scrimmage.