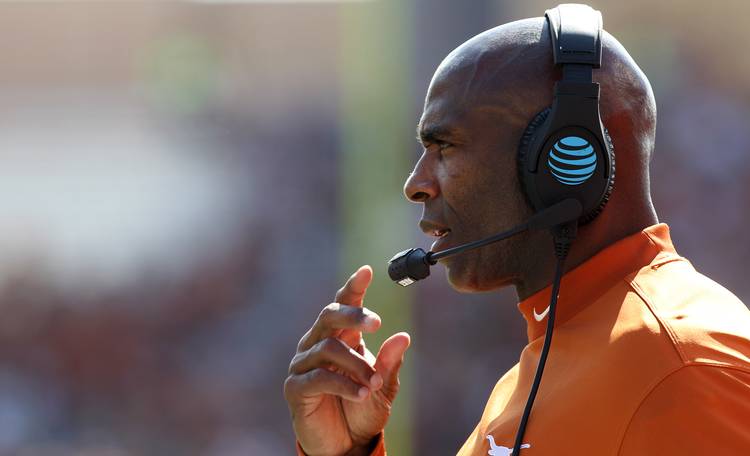 He was peppered with questions on his past, present and future. What didn’t work here? What did he have to overcome when he took over? Do you feel the administration has already made up its mind?

Meanwhile, all throughout his presser, a wall of Texas players — more than 50 of them — stood in a line of solidarity, listening to our questions and Strong’s answers. When he left, Strong slowly made his way through the throng of players who wanted a hug or a handshake.

It was, simply put, the most dramatic Monday presser of Strong’s three seasons. He entered amid a room full of tension — a TV cameraman poised in front of the ninth floor elevator at Bellmont Hall, ready for “the shot” some 20 minutes before the coach even got there, while other network cameras on tripods all waited, pointing toward the entrance to the room. It’s a tension that had been building since Matthew Wyman’s 25-yard field goal went through the uprights in overtime Saturday in Lawrence.

Strong finally arrived, followed by UT sports information director John Bianco. Perrin has been arriving with Strong in recent weeks, staying for the first few minutes of his presser before exiting. We didn’t see Perrin today.

Strong remained looking down as he stepped up to the podium. He clearly composed himself and took a swig of Gatorade up there. After a long, deliberate swallow, with hand in pocket, he began: “I just had a team meeting  with the players. They’re an unbelievable group of young men. I told them there’s a lot of reports out there, and there’s no reason for you to worry about them. … I said we have one game left, and it’s important that we go out and play this game and play for our seniors because they deserve to get to a bowl game. We’re all frustrated.”

Strong went on to talk about D’Onta Foreman, whom he called the best running back in the country, and how distraught the junior was after the Kansas game. He told us that he implored his players to loosen up, relax and just enjoy the game again. He went big-picture, talking about how this can all become a life lesson for these players, something about dealing and overcoming adversity that they may not truly understand until maybe 10 years down the road. Then he took questions.

Perhaps the best one, though, came from our own Brian Davis, who just simply asked Strong: “Can you state your case” for staying?

“Well, the wins and losses, that’s what doesn’t add up,” Strong said. “But look at the program, and what’s in the program now. On the offensive side, you lose Perkins, Swoopes and Petey. Everyone else is returning, with a bunch of young guys we redshirted. On the defensive side, you lose Dylan, Boyette and Tim Cole. On that side of the ball, you see what you have coming back. You see how well you recruited and the foundation that you laid. Every player in this program is going to graduate. That’s my biggest concern, the academic side. That’s where the struggles with a lot of these players are, and something they don’t feel comfortable. I don’t have those issues. You set a standard within your program and that’s what you expect from your program. That’s why you get so much support from the players. You’re building the total person. … You have to respect the player. If you ask them to respect you, then you have to give them the respect they deserve. It’s coming, and that’s what’s gonna be fun. I told them yesterday that this group of guys will win the national championship, and I feel strong about that statement.”

On to some other specific Q&As:

On whether he’s had specific talks with Fenves, and whether he expects this to be his last game: “I spoke yesterday with Mike, and Greg and I have spoken. They’ve been upfront and told me I would be evaluated at the end of the season, and that after the last game with TCU a decision will be made.”

On how difficult this week will be on the players: “When you have character and when you have the class within your program, they understand. They read it all. I try to tell them don’t read it all, that I will be upfront and very forward with you. I don’t think (the week) will be hard. They had yesterday off, they’ll go practice today and work all the way up to game day. They’re gonna work. I’m not concerned about that.”

On how he thinks the school has handled the situation: “I want to come back. I look at the job this staff has done, I look at the players we’ve put in place and how far we’ve come. Yeah, the wins and losses don’t stack up, but you’re still looking at a young football team, and everything’s in place for the upcoming year with a lot of talent. But the school has been upfront and very forward with me, with Fenves and Mike.”

On whether he thought it would take four years to turn it around: “You never know till you walk into a situation and see exactly what you have. My first year, you just got out of the having to clean up a program. Not so much cleaning up the program — I don’t even want to blame coach Brown — but some changes we had to make with some players. Then I lose Ash, even Espinosa, two guys right there on the core of my offense, and you come in with a young quarterback. We were really solid on defense, but when you lose your top two players, it’s really tough, and then you lose players in the program. There are things that you as a young man are expected to do, when you teach young men to live their life. Some just felt they wanted to do it their way, and I said this isn’t the place for you.”

On whether he felt the team was focused more on the game or his job situation in the fourth quarter Saturday: “I told them you gotta play relaxed and play loose. We had so many opportunities that slipped through your hands that we didn’t take advantage of. When you play those type of teams, you gotta put them away early. We never were ourselves. We never got into a rhythm. The effort’s there; guys were running around trying to make plays, but you’ve just gotta relax and have fun.”

On whether he feels the decision has already been made: “I hope not. I don’t believe it has.”

On whether he feels 6-6 is enough for the program to move forward: “Well, they said I’d be evaluated after that game. I don’t know how they’ll be thinking, but winning that game will help.”

Strong sprinkled in a few interesting odds and ends. He said he received a text from Quandre Diggs after Saturday’s loss, expressing his gratitude for having played for Strong for his final season. He said Arkansas coach Bret Bielema texted him on Sunday, pointing out the leadership Strong has shown these past few years. And that he has received message from Earl Campbell and Johnnie Johnson. He said players saw an ESPN tweet Saturday morning on Strong’s job security, and had to address the team about it prior to the game. And he said that when he got home Saturday night, he just stared at the wall, reliving the loss.

And then, 30 minutes after it started, it ended. There was a loud burst of applause from his players as he made his way through the throng.