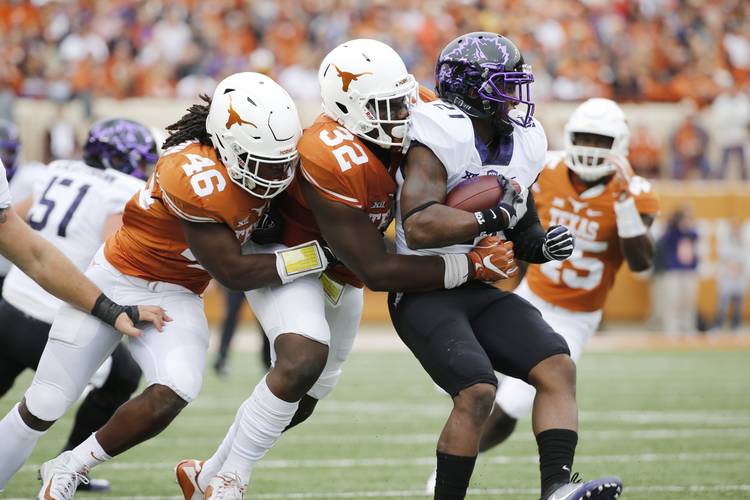 And Texas, in a must-win game for a couple of important reasons, is trailing TCU, 7-6.

The difference so far in this game, which has faded into a battle of punters and missed opportunities, has been Texas’ inability to finsh drives.

One first quarter drive got to the 11 on a big 48-yard pass from Shane Buechele to Devin Duvernay, but the drive stalled at the 3 thanks to a busted play on third down.

The Longhorns, facing a fourth-and-goal at the 3, settled for a 21-yard field goal from Trent Domingue. It was a nine-play drive that ate up 4:20 of game clock. TCU led, 7-3.

On the next drive, now into the second quarter, Charlie Strong and Sterlin Gilbert opted to go for it on fourth-and-4 from the 30, rather than try a 47-yard effort from Domingue. Buechele threw incomplete to Dorian Leonard, and TCU’s 7-3 lead held.

On Texas’ next drive, the Longhorns got to TCU’s 21. Domingue missed a 37-yard field goal try that would’ve cut the lead to 7-6.

On Texas’ next drive, it appeared as though Texas would take the lead after reaching a first-and-goal situation at TCU’s 4-yard line. But D’Onta Foreman was stopped for a 1-yard loss, then on second down bulled down to the 1. But on third down, he was stuffed at the line for no gain, and on fourth-and-goal from the 1, Strong and Gilbert chose their junior running back over a chip-shot attempt from Domingue or an 18-Wheeler run from Tyrone Swoopes. Foreman was stopped short of the goal line on a play that had to be reviewed.

Three plays later, DeShon Elliott picked off a Kenny Hill pass and returned it 24 yards to the Horned Frogs’ 9. But Buechele threw incomplete on first down, Foreman took it six yards down to the 3 on second, and Buechele’s third-down run netted 2 yards, down to the 1.

Facing another fourth-and-goal at the 1, Texas decided field goal, much to the disappointment of the crowd. And it wasn’t Domingue, but walk-on Mitchell Becker who made it from 24 yards out.

How the scoring has gone:

Texas: Mitchell Becker 24-yard field goal, 1:14
The drive: 4-2-1:14
The key play: It had to be the actual kick itself, which came from Becker, not Domingue. The senior kicker was benched on senior day after missing a 37-yarder earlier.

Golden: Nuggets from TCU-Texas at the half