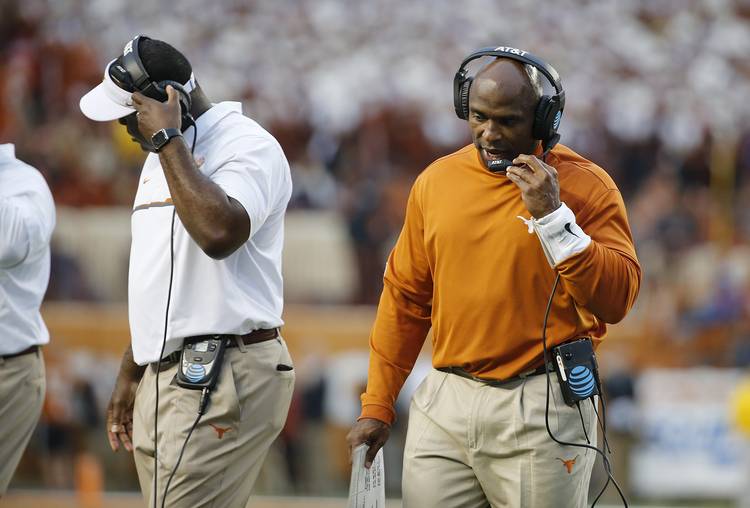 Charlie Strong coaches from the sideline in second half action at Royal-Memorial Stadium in Austin, Texas on Friday, November 25, 2016. James Gregg/AMERICAN-STATESMAN

It’s over at Royal-Memorial Stadium.

Texas, in last-game desperation mode trying to earn a sixth win to make it to a bowl game and also — maybe, depending on whose reports you choose to believe or not believe — save Charlie Strong’s job, rolled over and showed up flat, falling to a five-win TCU  team that’s in equally lethargic straits, 31-9. Well, almost equally lethargic; the Horned Frogs became bowl-eligible, at least.

No bowl game for Texas.

The Longhorns very likely will be looking for a new head coach, perhaps as soon as Saturday.

We’ve seen the last of Tyrone Swoopes, Dylan Haines, Paul Boyette Jr., Kent Perkins and the rest of the seniors.

We’ve also probably seen the last of D’Onta Foreman, who’ll probably opt out of starting over with a new coach in favor of jumping into the NFL Draft, which has become interested in drafting running backs in the first and second rounds again.

It took Strong longer than usual to arrive at his post-game presser. And when he spoke, he sounded as shell-shocked on Friday as he did last Saturday in Lawrence.

Friday was symbolic of what’s plagued the Longhorns all season — and Strong throughout his three years here. It wasn’t a case of what went right, but what went wrong. The yards were there, but the points weren’t. Fourth-and-goals at the 1 should be no-brainers when you have Foreman and Swoopes’ 18-Wheeler package to use, yet Texas had to settle for two short field goals and a stuffed run for no gain. Even the kicker was benched — senior Trent Domingue, who won the Baylor game but was sidelined in favor of a junior walk-on after missing from 37 yards out.

Texas settled for field goals while TCU’s Kenny Hill was running for touchdowns. Foreman had another foray into the UT record books, rushing for his school-record 13th straight 100-yard game and becoming only the second 2,000-yard rusher in school history, but also was stuffed short of the goal line on back-to-back plays in the second quarter.

Tom Herman’s Houston Cougars fell at Memphis the day after reports broke during Thursday night’s Texas A&M-LSU game that Herman-to-Baton Rouge was an all but done deal. Those reports, of course, were followed by others that said Herman would be willing to forego LSU in favor of Texas — if the Longhorns reached out to him, of course.

Where does that leave us? Who knows. Saturday’s the day that ESPN reported could be the day LSU inks Herman. It’s also the first day after the regular season, which Texas athletic director Mike Perrin said on Sunday would be the time to evaluate Charlie Strong’s job performance.

Strong has two years left on his contract. He’s 16-21 with the Longhorns. The Texas malaise is this: The last time the Longhorns failed to make it to a bowl game was 1992 and 1993, John Mackovic’s first two seasons. And this group of seniors who were lauded before the game also have the most number of losses (26) in school history.

On a day when Texas had every reason to play big, the Longhorns were unable to crack the end zone. A first halfTre that saw Texas produce 12 first downs, 254 yards of total offense and an 18:46 to 11:14 edge in time of possession also saw the Longhorns with only six points to show for it at the break.

The second half was even worse. Dylan Haines whiffed on Kenny Hill at the 30 on the way to a critical 41-yard touchdown run that put TCU up 17-9, and even when Hill and tailback Kyle Hicks were taken out, backup quarterback Foster Sawyer — starting at his own 3-yard line thanks to a 74-yard punt from Dickson — sliced the Texas defense along with backup running back Trevorris Johnson, then essentially put the game away with a 28-yard pass to Daniel Walsh down to UT’s 5-yard line. Johnson scored on the next play for the 23-9 lead with nine minutes left.

For what it’s worth, Texas’ drive to answer was a three-and-out. All Buechele incompletions.

Compound that with the fact that the Horned Frogs followed that Texas punt with a 70-yard touchdown scamper from freshman Darius Anderson for a 31-9 lead, and that the Longhorns’ ensuing drive came up short again, and this game ended in a dreary way appropriately on a dreary day.

It was the first time Texas has failed to score a touchdown since the 24-0 shutout loss at Iowa State on Halloween 2015.

Appropriately enough, the final play of the game was a Buechele Hail Mary pass into the end zone — that was intercepted.

Buechele ended the day 16 of 39 for 218 yards and the one interception. Foreman rushed for 165 yards on 31 carries, giving him 2,028 for the year. Four receiver finished with either four or three catches to lead the team.

How the scoring went:

Texas: Mitchell Becker 24-yard field goal, 1:14
The drive: 4-2-1:14
The key play: It had to be the actual kick itself, which came from Becker, not Domingue. The senior kicker was benched on senior day after missing a 37-yarder earlier.