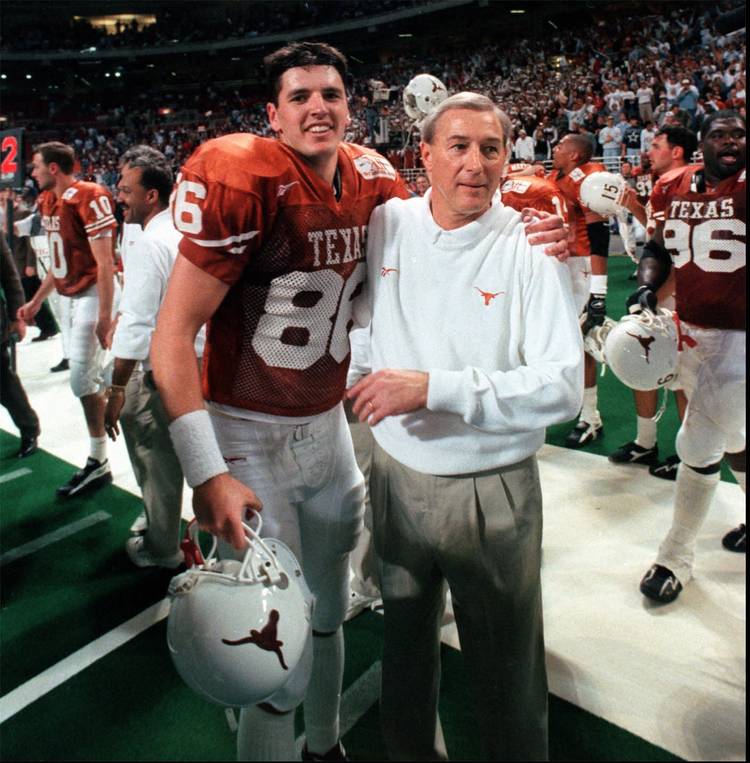 12/9/96 ralph barrera/aas file...Matt Davis, left, puts his arm around UT football coach John Mackovic at the end of the 1996 UT vs Nebraska game.

EDITOR’S NOTE: Wednesday marks the 20th anniversary of Texas’ upset victory over No. 3 Nebraska in the first Big 12 championship game. The following column ran the next morning on Dec. 8, 1996.

ST. LOUIS — The only downside to the miracle that unraveled in the Trans World Dome on Saturday is that James Brown offered no predictions on the upcoming bowl games,  the Super Bowl,  Wednesday’s Lotto drawing or the outcome of the O.J. Simpson civil trial.

He did,  however,  play up to and beyond the outstanding level of his outlandish prediction earlier in the week that unranked Texas,  not heavily favored against third-ranked Nebraska,  might win by three touchdowns.

In fact,  give or take about a dozen points,  the bold Texas quarterback was completely omniscient. While his coach, John Mackovic, was less forthcoming with prophesy,  he more than atoned with play-calling that was brilliant,  including as gutsy a gamble on a fourth-down denouement as these eyes have ever witnessed.

On the contrary,  he backed it up. Behind ironclad protection against a fire-breathing Cornhusker defense that registered 47 sacks this season but none on this day,  Brown hit 19 of 28 passes for 353 yards and one touchdown for a stunning 37-27 upset of the two-time defending national champion in a college football classic.

This was a breakthrough game for Top 25-bound,  8-4 Texas,  including breakout performances by a coach who accomplished what Steve Spurrier could not and by a quarterback who defied the odds and defeated a giant.

The careers of the two men have been endlessly intertwined by directing Texas’ current five-game win streak and this win for the ages.

These are two men under fire,  two men who have been through the fire. Brown was criticized for what he said;  Mackovic’s been railed on for never saying anything colorful. It’s said Mackovic can’t motivate;  Brown motivates (both sides) too much. Both have been hailed for rich play and play-calling and knocked for poor decisions.

One common thread is undeniable. They live and die by the big play and desperately need each other.

Together before an audience of 63,109,  at least two-thirds of them snickering at the junior quarterback’s prognosticating abilities, Brown and Mackovic pieced together a win of such grandeur that it is now possible to say with some degree of certainty that,  yes, the Texas program is indeed back.

Whether the fifth-year Longhorn coach will be is a matter of some doubt. His sophisticated offense and manly play-calling made such a large statement against a Nebraska defense that was previously confused with a brick wall that NFL courters are sure to call. If he were to leave,  Texas would owe him a debt of gratitude. His $600,000 salary never looked like such pocket change,  even with the additional $150,000 in bonuses he’s earned so far this season.

“At this point,  this win probably is my biggest with everything that was riding on it,” Mackovic said of his first Texas defeat of a Top 10 team after an 0-6-1 ledger against those teams. “Nebraska,  of course,  has continuity and consistency. Three conference championships in a row says something about Texas football.”

Six days after the unflappable Brown made the biggest prediction this side of Joe Namath,  he extended his record as a starter to 22-6. The 22nd is the school’s most defining win in 35 years since a 12-7 victory over a fifth-ranked Ole Miss in the 1962 Cotton Bowl. That happened to be the first of eight bowl wins at Texas for Darrell Royal,  a coach whose name now graces the team’s stadium.

Some might place Saturday’s achievement alongside a 28-6 Texas win over Roger Staubach’s second-ranked Navy in the 1964 Cotton Bowl,  but that sealed a national champion.

This win, thanks to Brown and Mackovic, stamps Texas as a future one.

On a wing and a dare: Revisit our Texas-Nebraska game story from Dec. 8, 1996