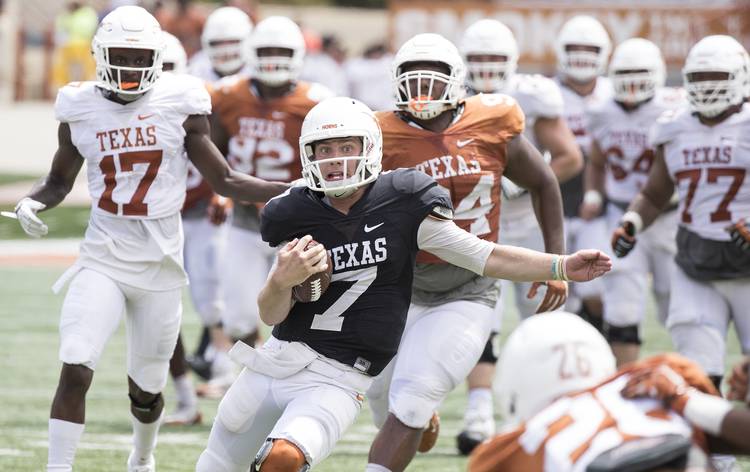 Texas Longhorns (7) Shane Buechele runs for the first down against the Texas defense during the Orange and white spring football game at the Darrell K Royalâ€“Texas Memorial Stadium on Saturday, April 15, 2017 RICARDO B. BRAZZIELL/AMERICAN-STATESMAN

Tom Herman’s first Orange-White scrimmage is in the books.

What you need to know:

Shane Buechele looks like he’s clearly ahead of Sam Ehlinger in the battle to retain his starting quarterback job.

The defense is a work still in progress. The front line had a nice day, but the secondary didn’t impress.

Toneil Carter has an intriguing combination of skills from the running back spot. He’s got good size, he’s quick, flashed good hands coming out of the backfield and ran with purpose. It’ll be a nice battle later with Kyle Porter for carries behind Chris Warren III.

Rowland, despite the late kick, didn’t have a home run day. He was good enough, but there’s some concern there coming out of the spring.

Jefferson spent Saturday at his middle linebacker spot, not lined up on the outside.

Who had good days?

Buechele, who was 22 of 39 for 369 yards and produced three touchdowns — a pair of first-half scores to Johnson and a second-half run. He threw one interception.

Johnson, who’s using his 6-6 frame for maximum impact. He high-pointed a fade pass from Buechele for his first touchdown, beat Eric Cuffee downfield for a sideline touchdown catch, wrong-footed Cuffee with a nice stop move. He had eight catches for 117 yards and two touchdowns.

Buechele and Johnson seemed to have a nice connection. Besides the pass-and-catch hookups, it was notable that when Buechele scored on his second-half quarterback draw, the first one to congratulate him in the end zone was Johnson.

Nelson had an active afternoon. He sacked Ehlinger, knocked down another pass, pressured the quarterback.

Lil’Jordan Humphrey, Texas’ other big-bodied receiver at 6-5, 220, was a big target.

Chris Brown, a freshman corner who redshirted last fall, made two notable plays. He had the hit of the day, a big sideline pop on Carter. And he also picked off Buechele in the second half.

Ehlinger, the mid-term enrollee true freshman, looked like a mid-term enrollee true freshman. Wearing No. 11 — Major Applewhite’s old number — Ehlinger was 8 of 31 for 162 yards and a touchdown. He had some nice moments, including a well-placed over-the-middle completion to Davion Curtis on the run, he barely missed a touchdown toss to Dorian Leonard on a 35-yard effort that went just off the receiver’s fingertips. But he also overthrew Jerrod Heard. And underthrew Humphrey. And generally didn’t look like he’s quite ready.

Carter showed some promise. It was an opportunity day for him, with the injuries to Warren and Porter. He had 10 carries for 60 yards. He passes the eye test. Good size. Looks good in pads. Good hands. Some quickness there. But he also fumbled the ball in the first half (though it wasn’t called; it was, however, noticed by Herman) and ran a wrong route out of the backfield in the second half.

Rowland hit field goals of 36, 27 and 31 yards. He missed a 49-yarder to the left. Prior to that 31-yard effort late with the game tied 48-48, Herman called time out to ice him. For what it’s worth, that 31-yarder was probably his steadiest kick of the day.

Jefferson remained in the middle. Maybe that’ll change by September. But he still made some plays, including a big final-play stop at the goal line with a big hit on Carter.