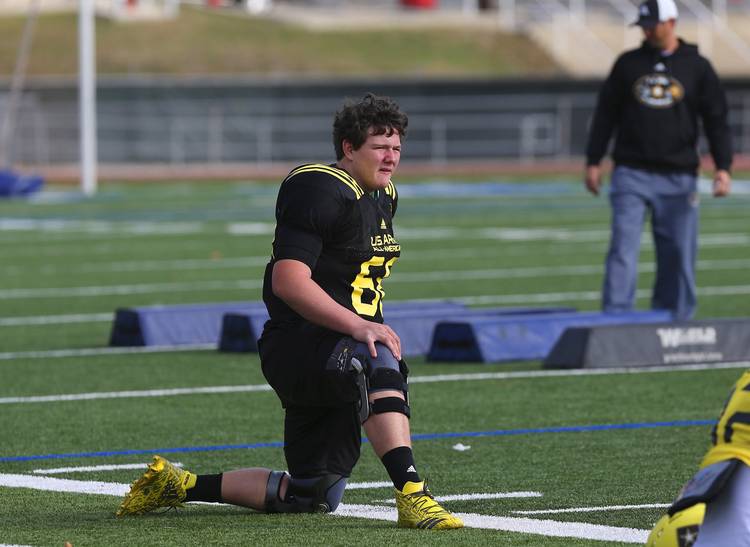 Derek Kerstetter from Reagan High School stretches Thursday January 5, 2017 at Comalander Stadium in San Antonio, Texas during practice for the West team for the upcoming U.S. Army All-American Bowl. The game will be played Saturday January 7, 2017 at noon at the Alamodome. John Davenport/SAN ANTONIO EXPRESS-NEWS

HOW DID HE GET HERE? One of only two offensive linemen that signed with Texas in 2017, Kerstetter originally was committed to Oklahoma State. He pledged to the Cowboys in June 2016. But Tom Herman and offensive line coach Derek Warehime, who had both recruited Kerstetter for Houston, were able to flip him to Texas in late December.

AT S.A. REAGAN: A three-year standout on the Rattlers’ offensive line, Kerstetter played primarily tackle at Reagan but expects to move to guard or center in college. The three-time all-district selection (including two first-team nods) was a U.S. Army All-American. Reagan went 31-5 in his three years, including a perfect 18-0 mark and three district titles in 26-6A.

WHAT HE’S WALKING INTO: Texas has rebuilt its offensive line over the past couple of years, but there is an opening or two on the interior line. Kent Perkins, who was last year’s right guard, signed a free agent deal with the Cincinnati Bengals. Patrick Vahe, the left guard, will be a junior this fall and Zach Shackelford, who’ll be a sophomore, was the starting center as a freshman last season.