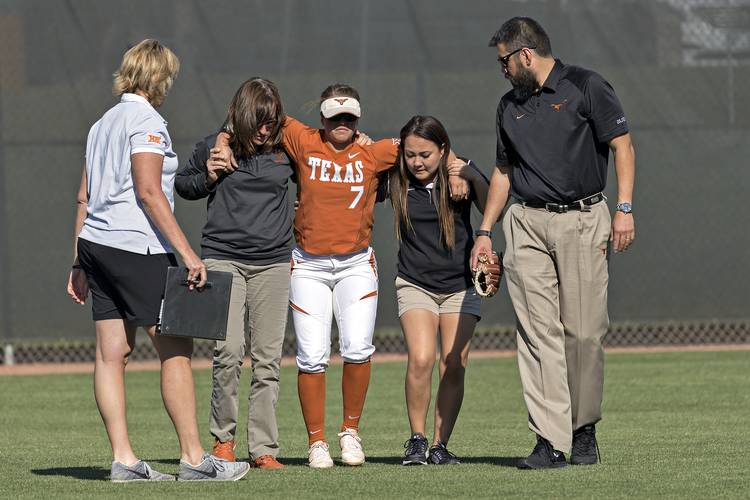 Reagan Hathaway gets help walking off the field after colliding with a teammate and injuring her right leg on Friday April 7, 2017. Hathaway tore her anterior cruciate ligament in her right knee and missed the remainder of a disappointing season for Texas. CREDIT Daulton Venglar/AMERICAN-STATESMAN

As the Women’s College World Series begins in Oklahoma City, Texas softball — coming off a 33-26 season, the sixth-worst in the program’s 21-year history — has plenty to forget about this year.

Texas struggled against ranked opponents, going 3-16 against teams ranked in the top 25.

The Longhorns were 1-3 against Texas State, a team that hadn’t beaten Texas but once in the last seven years, and also lost its first ever series to Iowa State, a program that had gone 1-49 against Texas prior to this season.

The Longhorns, who were seeded third in the College Station regional behind Texas A&M and Texas State, did reach the final against the Aggies but still saw their season come to an end.

Behind every dark cloud is a ray of hope, and the Longhorns will be looking for it next year.  Texas goes into the offseason with a phantom of hope that things will turn around, despite losing seven seniors and the core of its infield. The Longhorns will welcome a top pitching recruit in 2018 and should Reagan Hathaway bounce back from an ACL injury, Texas could right the ship next season.

On deck: Rising sophomore Taylor Ellsworth will be a team leader in 2018. She led the team with a .394 batting average to go with three home runs, six doubles and 24 RBIs. Her average was the fifth best in the Big 12. Two other rising sophomores, Tuesday  DeMargosian and Kaitlyn Washington, also had productive first seasons. Randel Leahy came on strong at the end and a healthy Reagan Hathaway will give Texas a solid core in its lineup. Hathaway suffered a season-ending knee injury midway through the season. The power hitter had four home runs, four triples and two doubles to go with a .252 batting average.

Romero was ranked No. 20 on FloSoftball’s Hot 100 class of 2017 list. She threw seven no-hitters, including two perfect games, during her final high school season. She told FloSoftball that she “grew up watching Cat Osterman” and that the Longhorns great was her “biggest inspiration.”

So there’s potential ahead for the Longhorns, but then 2017 also had a lot of potential.

Look for Leahy, a catcher who played third base her freshman season, to take back the position in 2018; Texas is loaded at catcher and doesn’t need her behind the plate. Ellsworth and Hathaway, who played catcher in high school, will serve that position well and Leahy’s defensive prowess will immediately fill the need at third base. She did quite well in her 37 games at that position in 2015, commiting just 10 errors with 56 putouts.

Jade Gorterez likely will compete with Mallory Schattle at shortstop, and Kaitlyn Slack will be in the mix to replace one of the three departing infielders.  Also, the Longhorns will welcome incoming freshman Mary Katherine Tedder from Hoover, Ala., who also likely will compete for a starting job in the infield.

Five questions for next year:

1. Will head coach Connie Clark return? Is it time for Texas to make change at the top to put new life into the program? Clark is the only head softball coach Texas has ever known. She’s been with the Longhorns since their first year as a club team in 1996. If she returns, it will be her 22nd season. Clark has 807 career victories and boasts a .698 winning percentage at Texas with five World Series appearances, but in the past four years her teams haven’t finished better than third in the Big 12 or made it out of regionals. But there’s been no indication from UT officials that Clark’s job is in jeopardy or that the longtime coach is stepping away.

2. Will Texas shake off its disappointing 2017? There was so much promise for 2017, but very little results and a struggle to find an identity. A strong start at the Mary Nutter Classic in late February with four straight wins, including victories over Notre Dame, No. 20 Missouri and No. 15 Tennessee , made Texas look like a national contender. But the Longhorns followed that with six straight losses and a 7-9 record in March that included a sweep by Oklahoma State to open Big 12 play. The Longhorns started 0-6 in conference for the first time since 2004.

3. Will Erica Wright return to her freshman form? After missing last season with a rib injury, Wright returned as one of the Longhorns’ top pitchers. She slowly improved as the season went on. She went 8-7 with a 1.69 ERA and 102 strikeouts in 116 innings. She had seven complete games and six shutouts. Her ERA was an improvement from her freshman year in 2015, but she also pitched fewer innings and had fewer appearances. With Davis no longer in the rotation, Wright, who’ll be a junior, should be Texas’ go-to pitcher.

4. Will the sophomore curse continue? Besides Wright last year, Davis also suffered an injury her sophomore year that forced her to the dugout for most of the 2015 season, one year after earning Big 12 freshman of the year honors. Hathaway, a sophomore, suffered a season-ending ACL injury this year after a stellar freshman season that saw her lead all freshmen with a .309 average, five home runs, seven doubles and 30 RBIs. Will the sophomore curse continue?

5. Who’s the next freshman phenom?  Texas has four incoming freshmen. Keep an eye on Romero. The pitcher could take some of the pressure off Wright and von Sprecken to carry the load on this pitching staff. In one of her perfect games this spring, Romero also hit for the cycle. She could make an immediate impact on what potentially may be a pretty solid lineup.

It’s time to let the dust settle a bit for the summer. Until next time, swing for the fences.