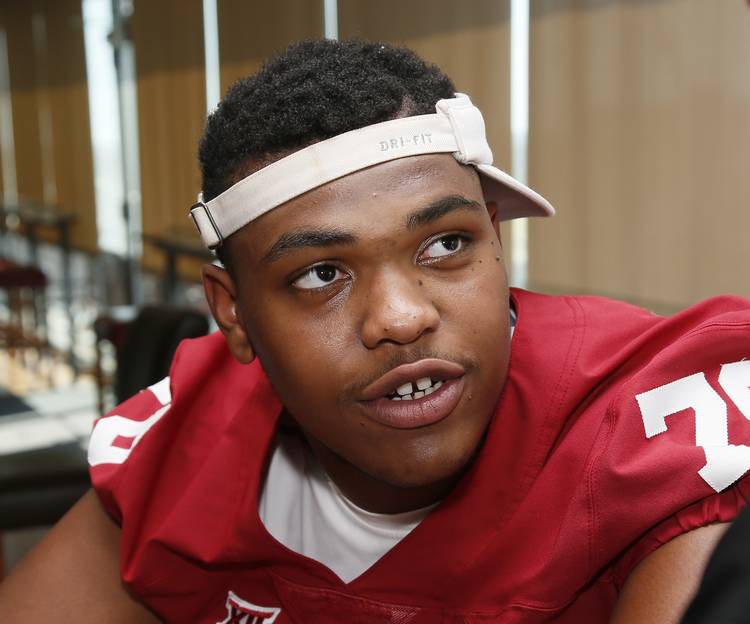 In this Aug. 6, 2016, file photo, Oklahoma offensive tackle Orlando Brown talks during an NCAA college football media day in Norman, Okla. Orlando "Zeus" Brown Jr. is a second team All-American who hasn't allowed a sack all season. The son of former NFL lineman Orlando Brown will be tested when the seventh-ranked Sooners face No. 17 Auburn in the Sugar Bowl on Jan. 2. (AP Photo/Sue Ogrocki, File)

Oklahoma’s offensive line is being lauded as one of the best units in the country — quarterback Baker Mayfield claimed that the line’s so good that he could be the team’s star tailback — and it starts with massive tackle Orlando Brown.

When Brown was sitting down on Monday giving interviews, it was hard to judge how big he really is. Then he started talking about how big he was in the sixth grade. Like 6-4, 330 pounds worth of big. He topped out at 450 pounds in high school but is now a lithe 6-8, 345.

Given how much the NFL covets left tackles, count on Brown being the first Big 12 player selected in next year’s draft.

Big 12 media days takeaway: Bob Bowlsby remains at the top of his game