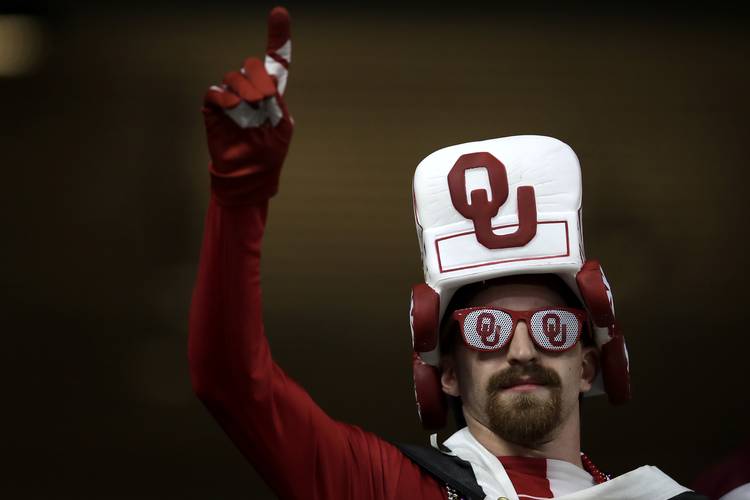 NEW ORLEANS, LA - JANUARY 02: A fan of Oklahoma Sooners cheers prior to the Allstate Sugar Bowl at the Mercedes-Benz Superdome on January 2, 2017 in New Orleans, Louisiana. (Photo by Sean Gardner/Getty Images)

Worst-case scenario: Riley finds himself in over his head, and OU struggles to find consistency at tailback and receiver.

The key game: Sept. 9 at Ohio State. A year ago, the Sooners knocked themselves out of the national title picture in September. A win in Columbus would look really attractive to the playoff committee come December.

Spring cleaning: OU folks wanted a clean transition from Stoops to Riley, who at 33 is the youngest coach in the country. Riley’s first hire was Ruffin McNeill, who will become the new assistant head coach and will direct the defensive tackles. McNeill, a former defensive coordinator at Texas Tech, hired Riley at East Carolina in 2010. It’ll be interesting to see how well McNeill works with Mike Stoops, the Sooners’ embattled defensive coordinator.

Back for more: The Sooners have a whopping 16 starters returning this season, which is tied for ninth-best in the country. But within the Big 12, TCU and Texas, both bringing back 17, return more.

Revamped offense: Riley was OU’s offensive coordinator in 2016. After he was promoted, Riley elevated Cale Gundy and Bill Bedenbaugh to co-coordinators. Gundy is in charge of inside receivers and recruiting, and Bedenbaugh will focus on the offensive line.

Happy returns: The Sooners are looking for new returners. Last year, those duties were handled by Mixon and Westbrook. The two handled all 12 of OU’s punt returns and brought back 30 of the 35 kickoffs that were returned.

No. 6: Coming Monday. Want a hint? This school won the 1982 national championship game on a Hail Mary touchdown pass.

Top opponents for Texas in 2017, No. 42: Baylor OT Patrick Lawrence