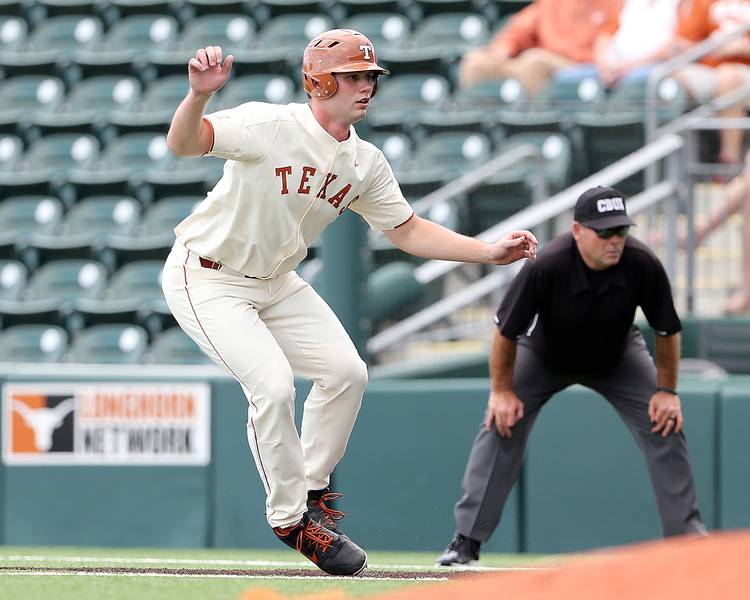 Longhorn designated hitter Zach Zubia takes a lead off of first base against Northwestern at UFCU Disch-Faulk Field on Sunday, March 4, 2018. JAMIE HARMS / FOR AMERICAN-STATESMAN

After clinching the series with Oklahoma on Saturday, the Texas baseball team ran out of magic on Sunday.

Oklahoma jumped out to a 3-0 lead after three innings, scoring one run in the second and two in the third off of Longhorn starter Blair Henley.

In the fifth inning, the Sooners scored three runs off a trio of Texas pitchers including Beau Ridgeway and Josh Sawyer.

Oklahoma starter Nathan Wiles got the victory on the mound, giving up five hits and one walk while striking out seven batters in 7 2/3 innings of work.

One of those hits came from Zach Zubia, who extended his streak of reaching base safely to 37 games. He went 2-for-4. Tate Shaw, Masen Hibbeler and David Hamilton added a hit apiece. In Saturday’s 5-3 series-clinching win, Zubia hit a two-run homer to put Texas over the top in the eighth inning.

The Longhorns return to action on Tuesday night with a 7 p.m. contest against UT-Rio Grande Valley at Disch-Falk Field.

Marcus Banks, the top cornerback in the state, includes Longhorns in top five