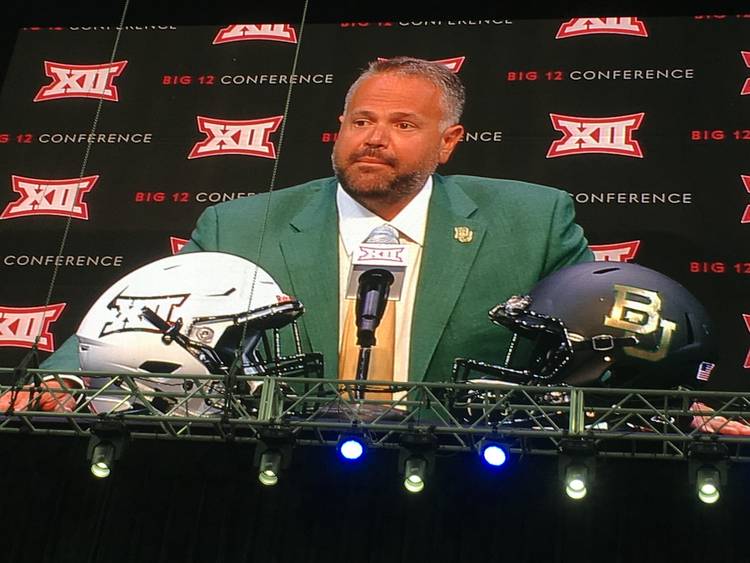 FRISCO — It’s unusual for an athletic director to take such public shots at the school’s football coach, especially when said football coach has put together three straight seasons of at least 10 wins.

Holder said in June: “You’ve got to give credit to Mike Gundy. He’s really matured into a difference maker as a coach. I would approach recruiting a little differently than he does. I’d want to finish higher in those recruiting rankings than we consistently do. I think that ultimately puts a ceiling on what you’re able to achieve. We do a great job of overcoming that with Rob Glass down in the weight room, and I think our coaches do a great job of disciplining and motivating and channeling what talent we have in the right direction.

“I just think we would be better served with a few more James Washington’s coming in the front door — you know, he came in as a two-star, three-star, left a five-star — we need to take some of those five-stars and turn them into seven-stars, which I think Rob Glass could do, and I think Mike Gundy could as well.”

Gundy wanted no part of the conversation Tuesday at the Ford Center. When he was asked about his AD’s comments, Gundy dodged and said he’d much rather talk about football.

Mike Gundy wanted none of that.

Gundy made other news. He pronounced Taylor Cornelius as “our guy” at quarterback. Cornelius, a fifth-year senior and former walk-on, is from Bushland, Texas. The town is unincorporated and about 14 miles west of Amarillo.

Other musings from Tuesday morning:

Pros and cons of opening statements

Texas coach Tom Herman brought a list of topics to mention in his very long opening statement. Reporters, via Twitter, started joking that he was filibustering to keep from answering questions.

Then there was Kansas State’s Bill Snyder. He’s 78 and a coaching life has taught him that maybe it’s more efficient to skip the orchestrated statement and go straight to the questions. So Snyder’s first remarks were about changes in special teams.

In the offseason, Snyder promoted two of his assistants — Andre Coleman and Blake Seiler — to coordinators. He was asked Tuesday if his offense might change. Snyder shook his head no.

Is it championship golf or football?

Matt Rhule dressed like Mr. Baylor for his appearance in front of reporters. He donned a green jacket, gold tie and khaki pants, while joking that his players were better dressed.

He gave off a certain vibe, maybe like he was starring in another sport.

Will gambling be a problem?

Back in May, the Supreme Court cleared the way for states to allow legalized gambling. Pro and college sports eventually will have to deal with it.

The state of West Virginia has five casinos. So coach Dana Holgorsen was an obvious person to ask about whether he’d addressed the topic of gambling with his players.

“It’s been discussed. Obviously because it’s such a high-profile situation across the country, it’s been discussed within our office and our administration office. We will talk to our players about it. We do every year. It used to be the number one thing that would get you banned from being able to play football. It was a clear-cut number one. It’s probably a clear-cut number two now based on what’s happened over the last few years, but it’s something we will address with them.

Checking in again with Gundy

It’s the first time in forever that Gundy wasn’t asked about his famous mullet.

Let’s check on it:

They’ll talk til they get hoarse

Coaches make a bevy of appearances during media days. They’ll do live radio and interviews with Fox, ESPN, Big 12 Podcast, Big 12 digital and Sirius/XM. They do formal podium interviews with the media in the morning, then participate in breakout sessions after lunch.

And after they leave the podium, the coaches often stop to answer more questions.

Let’s play a game. Where is Tom Herman? (He stopped for a gaggle of media) #Big12MediaDay pic.twitter.com/ShTgNmZaiH

TEXAS HISTORY: What were the storylines at the first Big 12 media days?