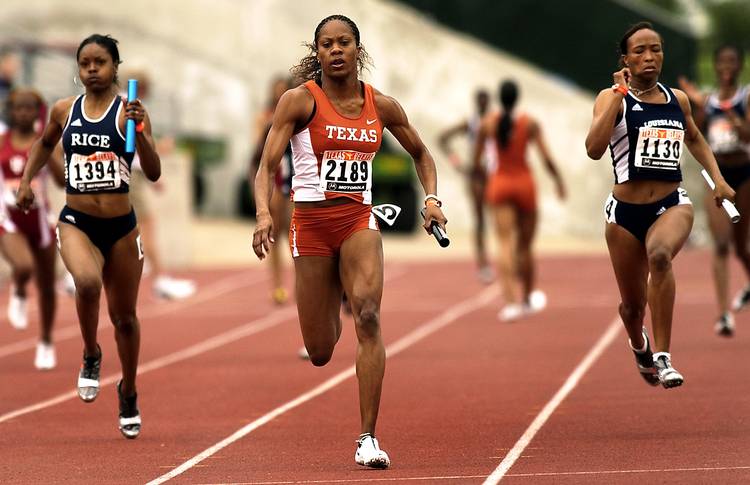 Texas' Sanya Richards pulls away from sprinters from Rice and Louisiana Tech to win a preliminary heat in the 400-meter relay at the Texas Relays in Austin on April 2, 2004. (Ralph Barrera/AMERICAN-STATESMAN)

Throughout Black History Month, the American-Statesman will take a daily look at the black athletes who have had a lasting impact in Texas’ athletic department. Today, we are writing about track and field standout Sanya Richards-Ross.

Richards-Ross spent only two years with the Longhorns, but she made the most out of her time in Austin. Over the 2003 and 2004 track seasons, Richards-Ross won five NCAA championships and was an 11-time All-American. Richards-Ross left Texas with the school’s indoor (50.82 seconds) and outdoor (49.89) records in the 400 meters and those standards stood until 2016.

Richards-Ross hails from Jamaica and she represented the United States at the Olympics in 2004, 2008 and 2012. In each of those Olympics, Richards-Ross ran with a 1,600-meter relay team that finished first. She also won a gold medal in the 400-meter dash in 2012. Richards-Ross, Melaine Walker (400-meter hurdles, 2008), Michelle Carter (shot put, 2016) and Ryan Crouser (shot put, 2016) are UT’s only track and field products who have won an individual gold medal at the Olympics.

An injury prevented Richards-Ross from qualifying for the 2016 Olympics and she retired that same year. Over the past few years, Richards-Ross has authored several books, done color commentary for NBC at the Rio Olympics and starred in a reality television show. Richards-Ross married Aaron Ross, a former UT football player, in 2010.