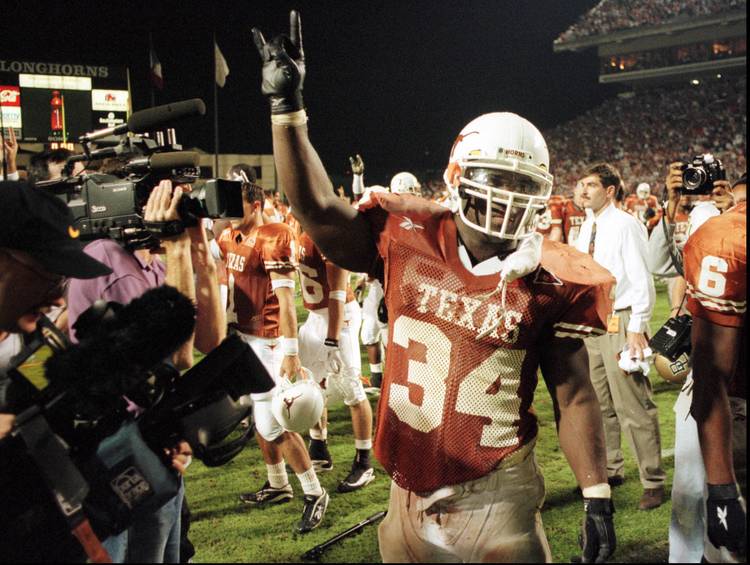 Running back Ricky Williams (34) flashes the hook'em following the end of the Baylor game where Williams set a new NCAA points leader. Photo by Larry Kolvoord/AA-S

Throughout Black History Month, the American-Statesman will take a daily look at the black athletes who have had a lasting impact in Texas’ athletic department. Today, we are writing about football player Ricky Williams.

Williams only wore the No. 34 for one of his four seasons at Texas, but the Longhorns retired that jersey in 2000. What did Williams do to deserve such an honor? As a senior, he rushed for a school-record 2,124 yards and won UT’s second Heisman Trophy. During that 1998 season, Williams also had a 350-yard game against Iowa State and also set UT’s single-game (six) and single-season (27) standards for touchdown runs.

ESPN recently ranked Williams as the 57th-best player in college football’s history. He left Texas as the NCAA’s all-time rushing leader, but those 6,279 yards have been eclipsed by San Diego State’s Donnel Pumphrey (6,405) and Wisconsin’s Ron Dayne (6,397). The NCAA, though, did not count statistics accumulated during bowl games while Williams and Dayne were playing. If the NCAA did, Williams would have 6,592 yards and just trail Dayne’s 7,125 yards.

Nevertheless, no Longhorn has rushed for more yards in a game, season or career than Williams. Selected fifth in the 1999 NFL Draft, Williams spent 11 seasons with New Orleans, Miami and Baltimore. Williams retired after the 2011 NFL season and has since found work as an analyst on the Longhorn Network.