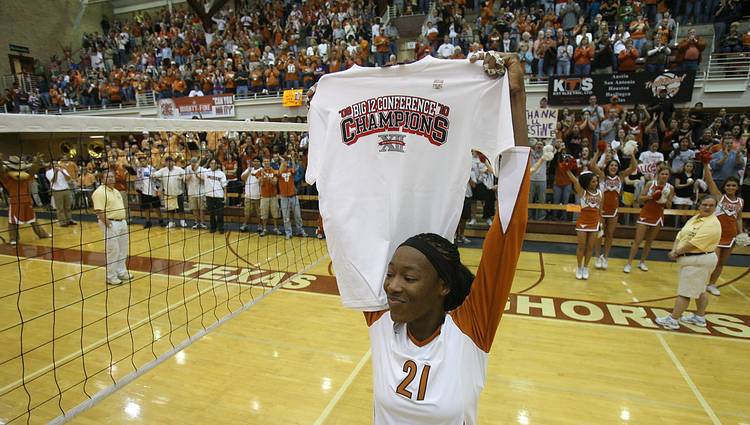 Texas' Destinee Hooker proudly displays her "Big 12 Champions" t-shirt after the Longhorns clinched a conference championship with a win over Kansas at Gregory Gym on Nov. 28, 2009. (Rodolfo Gonzalez/American-Statesman)

Throughout Black History Month, the American-Statesman will take a daily look at the black athletes who have had a lasting impact in Texas’ athletic department. Today, we are writing about two-sport star Destinee Hooker.

Who is the greatest volleyball player in UT’s history? From 2006-09, Hooker certainly made her case. A three-time All-American and the Big 12’s player of the year in 2009, Hooker led Texas to the NCAA title match during her senior year.

Hooker 1,821 kills rank third all-time at Texas. Her .326 hitting percentage, which is the seventh-best rate in school history, was better than the two Longhorns who recorded more career kills. Only three players at Texas had more solo blocks than Hooker, a 6-4 outside hitter who stuffed 132 shots by herself.

Hooker won a silver medal with the United States’ volleyball team at the 2012 Olympics. Texas inducted her into its Hall of Honor in 2015.