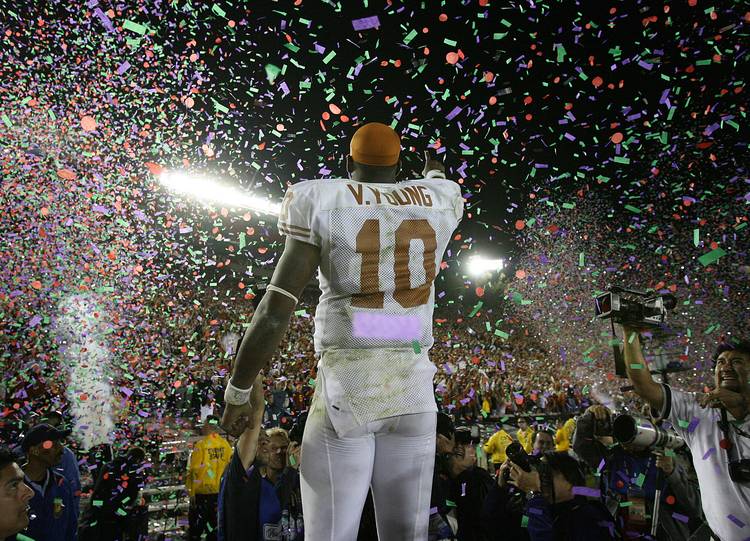 Vince Young celebrates after the National Championship game at the Rose Bowl in Pasadena, Calif., on Jan. 4, 2006. Deborah Cannon/AMERICAN-STATESMAN

Throughout Black History Month, the American-Statesman will take a daily look at the black athletes who have had a lasting impact in Texas’ athletic department. Today, we are writing about football player Vince Young.

A 6-5 quarterback out of Houston, Young ranks sixth in career rushing yards at Texas. Only six Longhorns have thrown for more yards that Young, who appeared in 35 games from 2003-05. Young was also the runner-up for the 2005 Heisman Trophy.

Additionally, Young gained a reputation for delivering big performances on big stages. He was named the Offensive MVP of the 2005 Rose Bowl. One year later, Young threw for 267 yards and ran for 200 yards as Texas secured a national championship with a 41-38 win over USC. Young’s 8-yard touchdown run with 19 seconds left against the Trojans is arguably the greatest play in the history of college football.

Young was the third pick in the 2006 NFL Draft. He won the offensive rookie of the year award with the Tennessee Titans, but his NFL career later fizzled.

Despite his professional shortcomings, Young’s achievements at Texas have constantly been lauded. Young’s No. 10 jersey was retired by UT in 2008. He was inducted into the athletic department’s hall of honor in 2015. This past year, Young got the call to the College Football Hall of Fame.