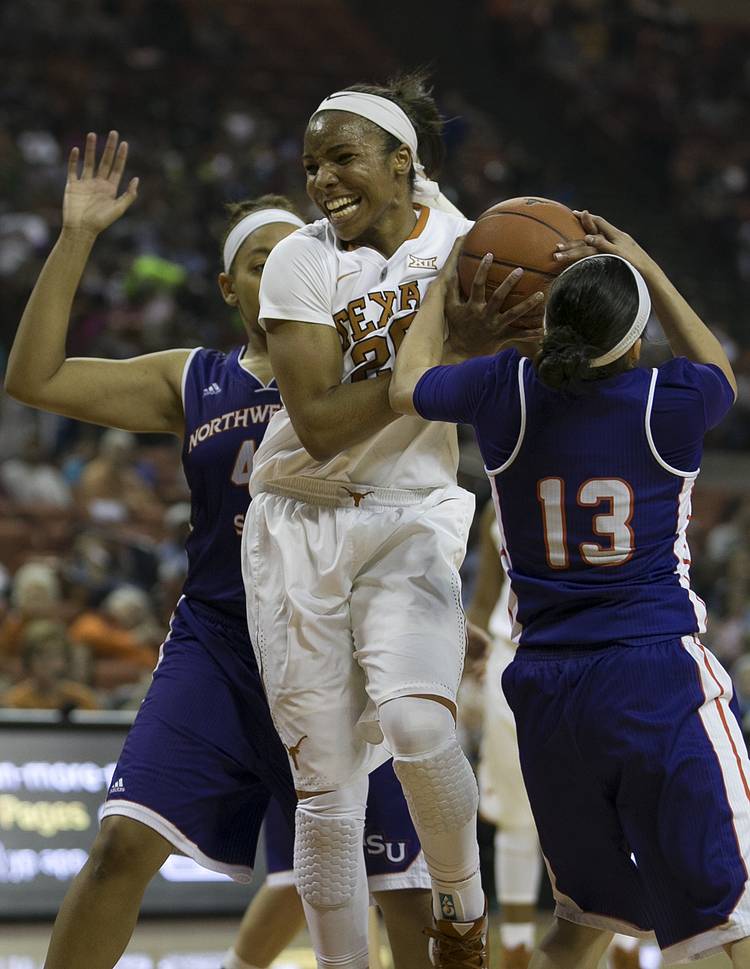 Texas's Brianna Taylor pushes through the defense of Northwestern State's Tia Youngblood and Janelle Perez during the first half of play at the Frank Erwin Center in Austin, Tx., on Wednesday, November 18, 2015. Texas beat Northwestern State 86-33. DEBORAH CANNON / AMERICAN-STATESMAN

The sixth-ranked Longhorns are seeking their first victory in Ames since 2009. Texas beat ISU 75-54 last month in Austin. Texas has reached 20 victories for the 33rd time in team history. Senior Imani Boyette leads the team in many categories — points per game (13.4), rebounds (10.0), blocked shots (70), turnovers (65) and field goal percentage (.565).  Sophomore Brooke McCarty leads in three-pointers made (42) and minutes per game (29.1). Junior Brianna Taylor leads the team in steals (35), senior Celina Rodrigo leads in assists (82) and sophomore Ariel Atkins in free throw percentage (.833). The Horns are coming off a 66-51 victory over Kansas State, their fourth straight win since Baylor handed them their lone loss.

The Cyclones lead the series over Texas 17-12. They have made 200 three-pointers in 12 straight seasons. This year they have hit 134 treys. Senior Kidd Blaskowsky ranks 10th all-time in school history with 204 career 3-pointers. ISU beat the Longhorns 59-57 last season, erasing an 18-point deficit to hand then third-ranked Texas its first loss of the season. Seanna Johnson is tied for seventh in the nation in double-doubles this season with 13 and tied for first among Big 12 players (with Imani Boyette). The Cyclones have finished in the upper half of the Big 12 the last seven seasons. They have made the last nine NCAA Tournaments, one of just 10 teams nationally to do so.