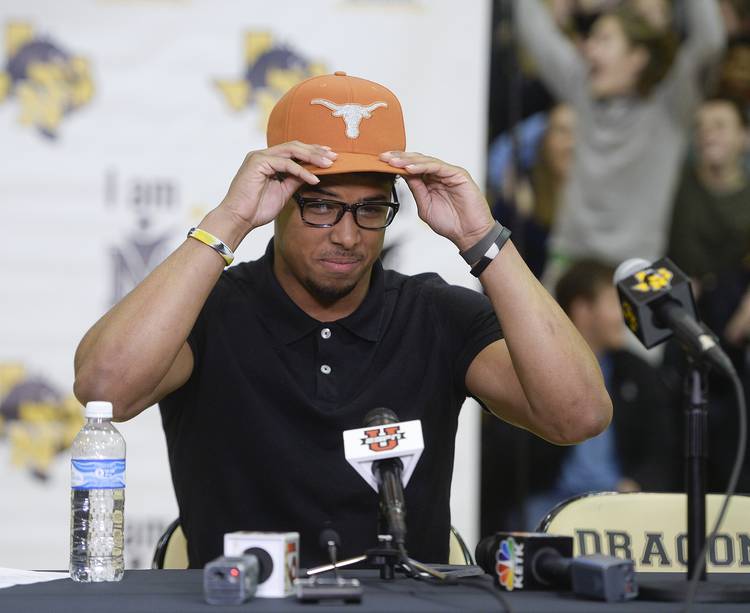 Nacogdoches High School football player Brandon Jones dons a UT cap as he announces that he will be attending the University of Texas to play NCAA college football, Wednesday, Feb. 3, 2016, during a national signing day event in Nacogdoches, Texas, (Victor Texcucano/The Daily Sentinel via AP)

Still, Jones said he “probably” would have still chosen Texas last week even if he knew Vaughn wasn’t going to stick around because “I have a really good relationship with Coach (Charlie) Strong and Coach (Vance) Bedford and Coach (Jeff) Traylor.”

On Thursday, Texas announced Vaughn was leaving Strong’s staff after two seasons. The reason is believed to be tied to Vaughn’s involvement in NCAA violations at Ole Miss where Vaughn coached from 2008-11. Strong released a statement saying “Chris did a tremendous job for us. He’s a terrific football coach and a great person. However, circumstances have put us in a position that we are going to part ways.”

Jones, whose chose Texas over Texas A&M and Baylor, said on Friday he has yet to speak with Vaughn about Vaughn leaving but that he has spoken with Traylor about the situation.

Jones sat down with the American-Statesman on Friday for a wide-ranging interview at Nacogdoches High.

Who are the eight coaches that have left Charlie Strong’s staff since 2014?