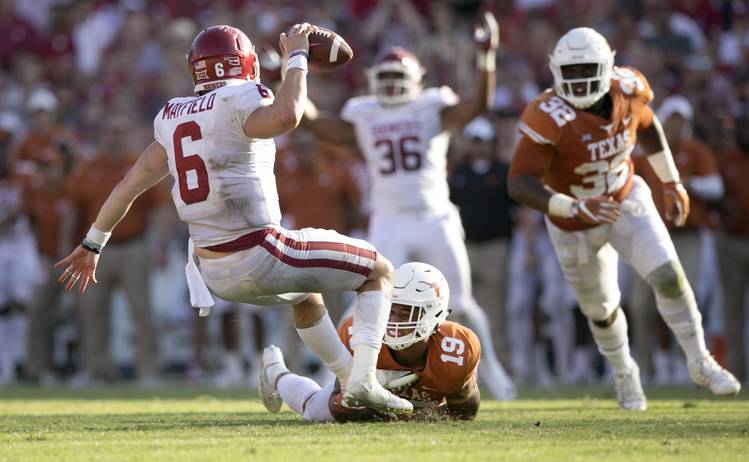 Oklahoma quarterback Baker Mayfield (6) is sacked by Texas defensive back Brandon Jones (19) at the AT&T Red River Showdown at the Cotton Bowl in Dallas on Saturday October 14, 2017. JAY JANNER / AMERICAN-STATESMAN

Jones was the second-highest rated member of Texas’ 2016 class, trailing only wide receiver Devin Duvernay. Jones was a four-star safety who ranked No. 3 on the 2016 Fabulous 55, trailing Gregory Little (Texas A&M) and Patrick Hudson (Texas via Baylor). The 5-10 defender was known as a hard-hitting safety with cornerback coverage skills during his prep career.

Jones was the District 16-5A defensive player of the year as a senior after recording 124 tackles and two interceptions.

He missed most of his junior season due to injury, but his sophomore year showed glimpses of his future potential. Jones finished with 95 tackles, five interceptions and eight pass breakups.

As a senior he participated in the Under Armour All-American Game.

The next day, Charlie Strong was in Nacogdoches, too.

Who Jones has been here — so far

Few players on this year’s roster entered the Texas program with more hype and expectation than Jones, a former high school All-American and a major recruiting win in East Texas for Strong. Jones is now entering his third year in Texas’ secondary. He’s started 13 of his 24 career games. Only one of those starts came as a freshman, as Jones flashed the athleticism that made him so highly coveted as a recruit while also making typical true freshman mistakes. He finished the year with 16 tackles and two blocked punts.

Jones started every game as a sophomore, partnering with DeShon Elliott to form a dynamic duo in the secondary. He finished the year with 61 tackles, including four for loss. He also forced a key fumble in a road win against West Virginia. Jones recorded two tackles and a pass breakup in the bowl win over Missouri.

It might seem that Jones just got to Texas, but he can probably be considered the old man in UT’s safety meetings now. With John Bonney now a graduate transfer at Texas Tech, Jones joins senior P.J. Locke III (19 starts) as the most-experienced among the Longhorns safeties and nickel backs. Once a highly-regarded recruit himself, Jones will now need to mentor freshmen safeties Caden Sterns and B.J. Foster.

Last November, Jones ended the junior season of West Virginia quarterback Will Grier with a forced fumble at the goal line that saved a touchdown and injured Grier’s finger. Nobody needs to be campaigning for Jones to cause more injuries, but those turnovers? Defensive coordinator Todd Orlando will take as many as he can get.