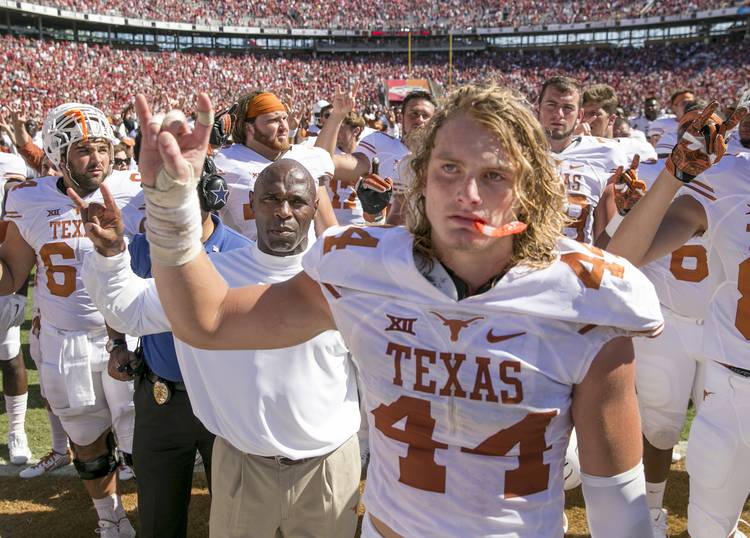 In today’s Golden’s Nuggets, Cedric touches on a couple big Bevo-related items: Here’s what he had to say about Breckyn Hager’s comments about facing Tech this weekend:

The Texas defensive end will likely be muzzled for the rest of his sophomore season after stating his plans for Texas Tech quarterback Patrick Mahomes II, who is questionable for Saturday’s game with a shoulder injury.

Hager said on multiple occasions Monday that he wanted to “injure that quarterback,” which is arguably the intent of hundreds of other defensive ends that play college football. The difference is they know not to verbalize it.

To steal a line from Chris Rock: I don’t think Breckyn should have said it. But I understand.

I’m a Hager fan. If the Longhorns had 11 players on defense that played with his effort, the Horns would be much better on that side of the ball. But there’s a time and place for everything, and while we understand that he wears his heart on his sleeve, Hager has to do a better job of thinking before he speaks.

Of course his comments went viral and drew the ire of Tech fans as well as Pat Mahomes Sr., the quarterback’s dad who made news himself over the weekend for getting arrested for public intoxication during Tech’s upset win at TCU.

We got the predictable apology via statement from Texas with Hager expressing remorse and Charlie Strong stressing how much respect the team has for Mahomes.

While I hope Hager never loses his refreshingly honest approach to things, he must learn how to more smartly answer questions while maintaining the candor we in the media love. We’ll take that approach over the cookie-cutter clichéd blather many players are encouraged to use.

Texas fans had better hope this isn’t the only statement the team makes this week.

For the rest of Cedric’s Nuggets, including his thoughts on D’Onta Foreman’s use as a wide receiver and UT hoops, click here.

The best Longhorns-themed Halloween costumes on the internet