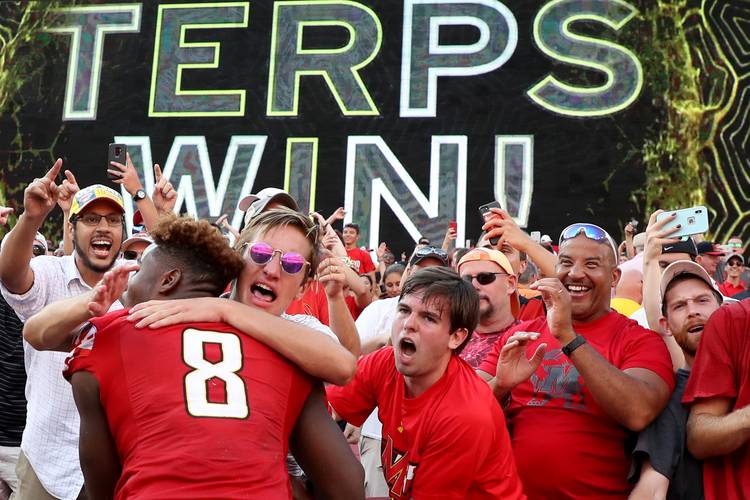 Tayon Fleet-Davis #8 of the Maryland Terrapins celebrates with fans following their 34-29 win over the Texas Longhorns at FedExField on September 1, 2018 in Landover, Maryland. (Photo by Rob Carr/Getty Images)

On the “real hostile environment” the Longhorns faced last week on the road:

There’s not a more candid athlete at Texas than defensive end Breckyn Hager, whose from-the-gut responses are honest to a fault. I love his spirit and his passion, but he also had just two tackles and didn’t play well. On the loss to Maryland, he said, “I’ve already buried it mentally.” But he also said he was struck by the “real hostile environment.” That struck me as odd, given the fact Longhorn fans made up more than half of the 47,641 spectators at FedEx Field. Hager also said he was “real confused at first” by the outcome, but said he observed his teammates’ faces and expressions and concluded “they were all really hurting more than ever” and said he saw “determination and reborn looks in their eyes.”

On the play of Sam Ehlinger and the offensive linemen on Saturday:

Sam Ehlinger comes off as a confident quarterback who knows part of his job is to look, well, confident and in control. He pointed out he thought he played better in “protecting myself, sitting in the pocket and finding guys downfield who were not his first progression. Mentally, my game has advanced.” I’d totally agree with that assessment, but he needs to close out wins if he hopes to win over his team and fan base. He also said he ran by design only two or three times, in part because Maryland used a linebacker or safety as a spy on him. He probably needs to run more often to truly be effective, but that’s risking injury. … Rice transfer Calvin Anderson played every snap at left tackle, and three of his fellow offensive linemen did as well. Anderson said he heard he was projected as a fourth or fifth-round NFL draft pick, had he come out last spring, but he loves being at Texas after graduating with a degree in mathematics economics.

Texas wideout Collin Johnson stood up for Nike’s decision to make Colin Kaepernick the new face of its ad campaign. “He’s standing up for what he believes,” Johnson said. “He stands up for that even if that requires losing everything. I’ll always respect that.” … Johnson had two exceptional catches in Maryland, but didn’t block well. Nor did his fellow wideouts, which crippled those hitch passes. Devin Duvernay had the catch of his life with a fully extended grab of a touchdown pass. “It was epic,” he said. “My teammates were calling me ‘Superman.’ ”

For the rest of Kirk’s 9 Things, including his thoughts on the MLS to Austin story, what happened to Big 12 football and the Oakland Raiders trade of Khalil Mack, click here.