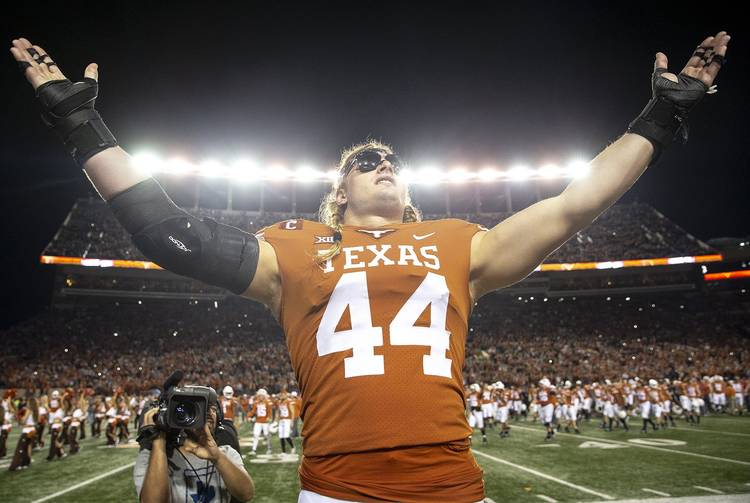 At the end of his postgame availability following UT’s 24-10 win over Iowa State on Saturday, Hager was told that Kansas scored 40 points against Oklahoma that evening. Hager then stated that “But OU has no defense. And what time is it? It’s 11:12 … and OU still sucks.”

I told Breckyn Hager that kansas scored 40 on Oklahoma. “But OU has no defense” he responded.

Days later, the Big 12 said that Hager was in violation of the conference’s sportsmanship and ethical conduct policies. Said Bowlsby in a statement: “Breckyn Hager violated the Conference rule that prohibits coaches, student-athletes, athletic department staff and university personnel from making negative comments about other member institutions for his remarks about the University of Oklahoma. This is Mr. Hager’s second violation of the Conference sportsmanship rules and therefore, he is receiving a public reprimand and will be expected to issue a public apology for his inappropriate comments.”

Two years ago, Hager had to apologize for saying he wanted to injure Texas Tech quarterback Patrick Mahomes II. That was his first violation of the conference’s sportsmanship rule.

UPDATE (5:15 p.m.): Hager has issued an apology that was released by Texas.

I consider sportsmanship to be an essential part of the game I so truly love. I spoke with our athletics director Chris Del Conte and Coach Herman about what I said after Saturday’s game and understand why it reflected poorly on me and my team. I had no ill intentions when I made my comments about Oklahoma, which included a phrase that’s used by fans, but I have to realize that it’s different coming from me. My thought process was that it would put a fun and light-hearted charge into the greatest rivalry in college football that my family has been involved in playing in for many years, but I can see now that was not the way to do it. I have the utmost respect for the University of Oklahoma and their football program and know a number of players on their team, and I want to apologize to them. I want to represent myself, my family, my football program, my University, and the Big 12 Conference in the best possible way. I’m truly sorry for the comments I made, will learn from this, and will keep working to improve my ability to think about the ramifications of what I say before I say it.”

Social reaction: Should Breckyn Hager have been reprimanded for trash-talking a rival?